Jordan Peele’s latest horror opus Us is smashing box office records just as his debut Get Out did in 2017. What this tells us is that audiences are hungry for horror films with more to scare us than bloody knives, gruesome monsters and screaming scantily-clad women.

Both of Peele’s works frighten, not only by providing all the blood and guts associated with the genre, but also by holding a mirror up to society’s often terrifying views on race and class.

Us and Get Out are just the latest in a long line of horror films with a social conscience however, so it’s a perfect opportunity to take a look back at a few horror classics that can educate, as well as horrify.

The Stuff is a horror comedy written and directed by the recently departed cult director Larry Cohen. “The Stuff” of the title is a white, gloopy, highly addictive pudding-like substance that starts bubbling up from the earth, of course this being the 80s, the only natural thing to do is sell it.

Soon The Stuff is in every home in America complete with it’s own fast food chain, bill boards and theme music. The only problem is the delicious goop turns everyone who consumes too much of it into a ravenous Stuff obsessed eating machine.

Seemingly the only people left not hooked on The Stuff are our main characters led by Mo Rutherford, an ex fed turned industrial saboteur who has been hired by a group of dessert company CEOs to investigate The Stuff and put a stop to it before it puts them out of business.

He is joined by Nicole, an ad executive in charge of selling The Stuff who Mo manages to sway to his side, and Jason, your standard precocious 80s film kid whose family have become addicted to The Stuff despite his warnings after he sees the white goop moving around in his fridge.

The cast is rounded out by ‘Chocolate Chip’ Charlie, a cookie company president who was deposed in order to gear his company towards selling The Stuff and Col. Spears, a gung-ho right-wing militia leader who, despite being a crackpot has the firepower and the broadcasting reach to help our heroes take on The Stuff.

The film is both a funny and gruesome B-movie take-down of the corporate greed and junk-food consumerism of the time. This was the height of the cola wars after all, however it’s a message still relevant today, a time when KFC can buy a spot at a music festival to advertise. 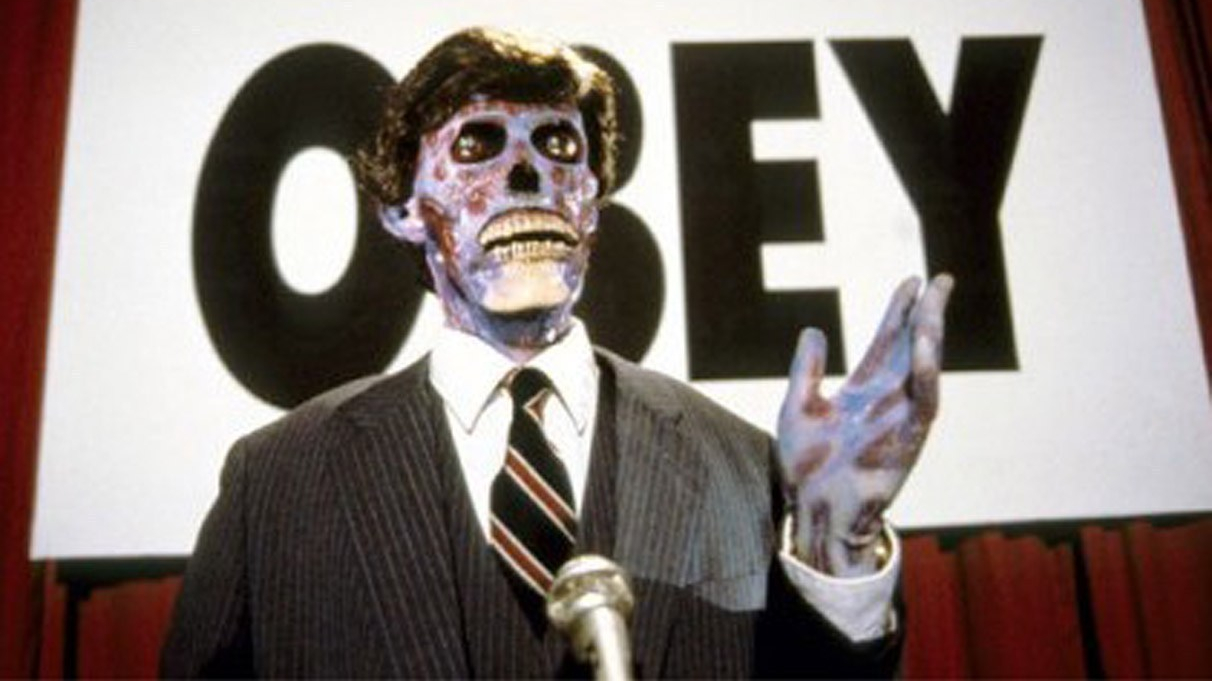 This entry is closer to science fiction than horror even though it comes from the dark master of the genre John Carpenter, who nevertheless manages to bring over some horror elements from his earlier works like Halloween and The Thing.

‘Rowdy’ Roddy Piper of classic WWF fame stars as a down on his luck drifter who we meet believing in the American dream, with this illusion shattered once he discovers a pair of sunglasses which allow him to see the truth.

The reality is that the upper echelons of society have been infiltrated by aliens and the rest of humanity bought off or subdued through subliminal messages everywhere telling us to “OBEY” and “CONSUME”. This causes our hero’s supplies of bubblegum and patience to run out and he joins an underground group of others who have seen the truth to put a stop to the alien’s malicious signal.

Despite the monstrous true faces of the alien infiltrators and a trademark John Carpenter nihilistic ending, the real horror and social commentary in They Live is the aliens are just stand-ins for those at the top in our reality, trying to keep those at the bottom divided and docile so they can reap the rewards of their elevated positions.

Night of the Living Dead could be the most important horror film ever made, not just because horror icon George A. Romero’s directorial debut gave the world its first taste of the zombies (or “ghouls” as they are referred to in the film), which would turn into a global phenomenon but also for the critique of the late-60s America.

The plot of the film may seem completely trite to anyone familiar with the zombie films that emerged post-Night of the Living Dead however it is important to remember the film was one of the first of its kind. The film opens with Barbara (Judith O’Dea) and her brother Johnny arriving at a graveyard to lay a wreath on their long dead father’s grave.

Not long after they arrive they are attacked by a strange man who kills Johnny whilst Barbara escapes to an abandoned farmhouse where she falls into shock. She is saved by Ben and they are joined by other survivors and attempt to find out what is happening and survive the night.

Several film historians and analysts have described Night of the Living Dead as a critique of the Vietnam War and the culture of America at the time, with the zombies in the film being compared to Richard Nixon’s ‘Silent Majority’.

Also of note is the character of Ben played by Duane Jones, an unknown African American theatre actor, making his casting unusual for the time as black men were rarely afforded such a heroic and capable role in a film otherwise filled with white actors. Despite this, the ending of the film can be read as a grim condemnation of race relations in America.