If fans had any concerns or fears about the much-anticipated  live-action remake of  Disney’s 1994 fan-favourite The Lion King, then NO WORRIES!

Jon Favreau (Iron Man, The Jungle Book) brings fresh life to the story, with an amazing revamped score, breathtakingly re-imagined scenes, and a new spin on the characters of the pride lands.

This remake was always going to be compared to the original, and our favourite moments from the movie are still as entertaining and thrilling as they were 25 years ago, with subtle rejigs and hints of deja vu.

The title character of Simba, voiced by JD McCrary (young Simba) and Donald Glover, maintains his playful and rebellious element, but McCrary shows his talent when he portrays true devastation within Simba, during his father’s death. Glover meanwhile has the opportunity to play more of Simba’s laidback “no worries” attitude, as the movie expands on his life away from home.

Simba’s journey from Pride Rock’s carefree cub to his transition of realising who he is and who he is meant to be and acknowledging his destiny as king is lavishly explored. As is his return home to face his past and save the pride lands from the tyranny of Scar.

Glover voices the range and development of Simba to perfection, helping the audience to feel the emotion within Simba’s personality, and his musical talents pay tribute to the original’s classic songs.

Of course some things never change, as some scenes are lifted straight from the original. The iconic opening of the sunrise, whilst ‘Circle of Life’ plays, as the animals gather to greet the new prince is near identical, down to the ants on a tree branch and running zebras. The mirror of this is to be welcomed, showing that Favreau paid respect to the original.

James Earl Jones is the only returnee, reprieving  his iconic role as Mufasa. The 2019 Mufasa isn’t identical to the original, with changes to some of his lines and his speech, but it is after all, the Mufasa that we all knew, the noble and mighty King of Pride Rock, and the one that we mourned when he met his demise at the hands (well paws?) of Scar.

Perhaps the biggest difference in the movie is that of the main antagonist, Scar. Jeremy Irons’ camp and charismatic Scar of the 90’s is out, and has been revamped with Chiwetel Ejiofor’s take. Ejiofor successfully portrays a more sinister Scar, with even his signature song, ‘Be Prepared’, being totally overhauled with a more ominous tune and lyrics, that will leave audiences with goosebumps whenever he appears on screen.

Scar’s minions, the hyenas have also been given a fresh take, with Shenzi (portrayed by Whoopi Goldberg in the 1994 movie) being promoted to the leader of the pack. The antagonists of this movie have been made scarier and with an even clearer ambition for power, which is a rare but welcome upgrade. 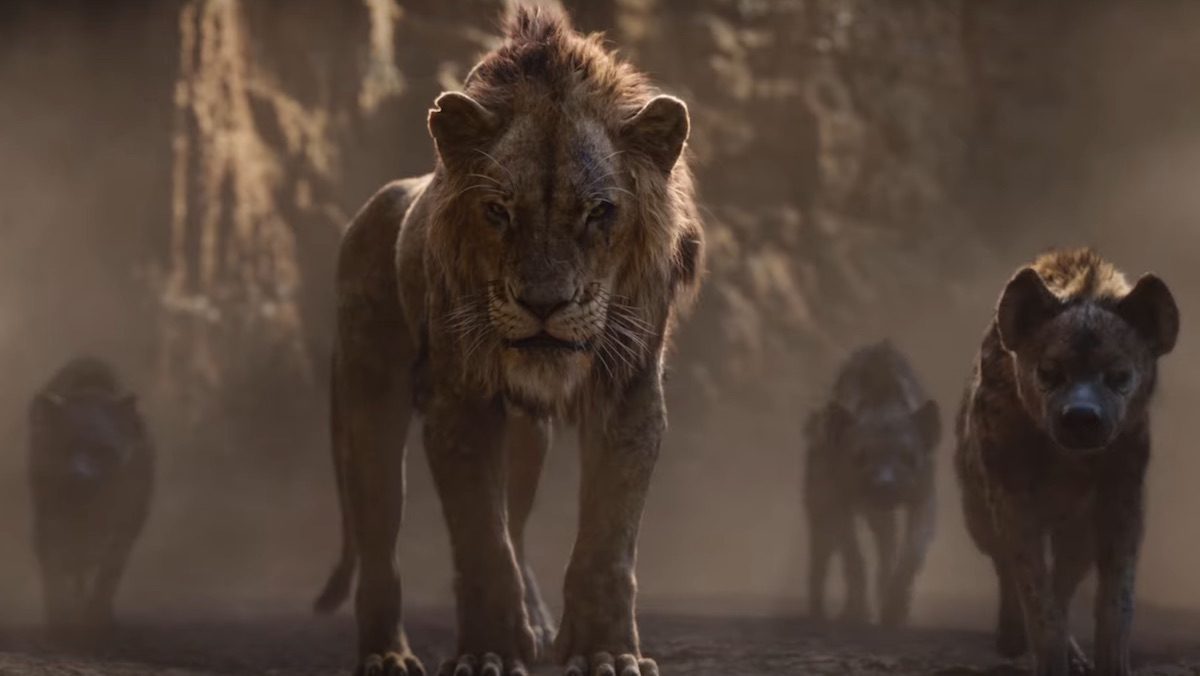 With this being a live-action remake, it did not allow for some of the bright and colourful scenes, and some of the slapstick moments. ‘I Just Can’t Wait To Be King’ is more subtle in its scenery, and we don’t see Zazu sat on by a rhino or being thrown by monkeys. Regardless of live action’s limitations, there is no expense of comedy here. What they lack in animated slapstick, they make up for with hilarious dialogue, one liners and puns that will have the audience in stitches.

No Lion King review would be complete without discussing double act Timon and Pumba, voiced by Billy Eichner and Seth Rogen. These two voice their characters chemistry to perfection, and have ensured that the new Timon and Pumba are just as adored as the original, along with their musical abilities in the revamped version of the legendary ‘Hakuna Matata’, where we finally hear what Pumba wasn’t allowed to say in front of the kids. (I think someone knew that there would be a bunch of 20-year-olds in the room)

Of course, what brings the special effects, characters and the script together is the music. Composer Hans Zimmer returns with a revamped score, with familiar beats helping to land the emotional stakes and move you to tears at Mufasa’s death.

With typical Disney humour, the movie has a sense of self-awareness, such as Pumba stating that ‘Hakuna Matata’ usually gets more of a reaction after a young Simba shrugs off the catchphrase, knowing that the iconic song had everyone in the cinema ready to burst into song.

Nothing however is without its drawbacks, and there are some things that did drag this remake down. Yes, this live-action remake bring a photo-realistic finish, but at what expense. Despite the comedic dialogue it cant make up for the lack of animated slapstick entirely, which can bring down the playful nature of the characters. With ‘I Just Can’t Wait To Be King’ rendered subtle and realistic, we lose an insight into Simba’s young imaginative nature, a part of the character which is central to his development.

As well as with ‘Hakuna Matata,’ you lose a sense of joyous feeling that was within the original: we can’t see them smile or show any form of emotion in anything other than their voices and actions, which almost removes an element from them. An element which made them so relatable 25 years ago.

Favreau’s remake of The Lion King is a fitting tribute to the original movie, which keeps true to its roots whilst managing to have an original take on a fan-favourite. Despite the drawbacks, the amazing talents of the voice actors (including megastar Beyonce) bring life to their characters. The Lion King is not to be missed.

So, for anyone that had any fears that their favourite Disney classic would be ruined, I have one thing to say.

Review: The Book of Boba Fett has an issue with the protagonist ★★★☆☆

Pam & Tommy: Is it worth the watch?

Shang-Chi and the Legend of the Ten Rings review: Marvel’s well-oiled machine★★★☆☆

In the loop with Stoop: The anti-capitalist meme

Staff and students eclipse Walk to the Moon challenge