“Reaching the top, emotions were high that I had made it. I was proud of myself for achieving this. Views were amazing!”

These were the words my 12-year-old self-used to describe reaching the top of Uluru. Now times have changed, as Uluru was officially closed for climbing on the 26th of October 2019. The closure marks an important moment for the local Anangu people, who as custodians of the rock have long campaigned for people to be respectful and not climb. Now 34 years after the government returned the site to them, the Anangu people can be rest assured that their sacred rock is now sacred once again.

Looking back when I climbed the rock in 2012, I feel conflicting emotions. Although I will always be proud of my achievement and for doing it at such a young age, I regret that I wasn’t more respectful to the Anangu people and their culture. I have always had deep respect for Aboriginal people and their rights as the first people in Australia, as I was educated about their culture in primary school. However, by climbing I displayed a complete disregard for what Uluru meant to the Aboriginal culture. No matter how much that I tried to convince myself at the time that I was, “climbing with respect to the Aboriginal people.”

Hopefully, with the permanent ban on climbing the rock. People will be able to fully understand the importance of Uluru and its connection with the Anangu people as I have been able to realise. Uluru represents a time of change, where we must all acknowledge each other’s culture and the respect that comes along with it. But this might take some time to achieve as Prime Minister Scott Morrison was notably absent from the celebration events 2 days later. Missing a key opportunity to highlight the importance of the climbing ban. Senator Dodson said regarding the PM’s absence, “He’s ducked us, the Prime Minister, and that’s a real insult to people who hold and carry customary law.”

Despite Morrison’s absence, the celebration of Uluru’s climbing ban saw non-indigenous people, partying alongside the Anangu people. Their participation providing some hope that one day we can all celebrate our cultures in equal respect for each other. 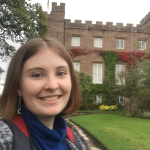 I'm a university student from Australia and I study a Bachelor of International Relations and Bachelor of Arts as a combined degree. I'm majoring in Women Studies and minoring in Creative Writing. I did a study abroad semester at Stirling University, Scotland in 2019.

I'm a university student from Australia and I study a Bachelor of International Relations and Bachelor of Arts as a combined degree. I'm majoring in Women Studies and minoring in Creative Writing. I did a study abroad semester at Stirling University, Scotland in 2019.

Over £500 raised in the first half of Aussie Week