If this article shamelessly finding its way into the arts section has not already settled the question for you, the still-open question of whether memes are a valid form of artistic expression begs another: what exactly are “memes”?

This is somewhat difficult to answer, because the concept has itself undergone a process of memeification (A test: have you in all honesty not hitherto found the subject of this article and its use of the word “meme”, I count four times, slightly unserious?)

What are we talking about, then? The word ‘meme’ comes from the Greek mīmēma (‘to imitate’) and was coined by Richard Dawkins – otherwise known for radicalising a generation of fourteen year-olds into believing their gran’s prayer beads were a threat to world peace – in his 1976 book The Selfish Gene.

A ‘meme’ was defined as a unit of cultural information, analogous to the way genes are a sequence of functional, biological information. And this analogy was taken still further by the newly-somewhat-established field of memetics, which seeks to study memes in the same evolutionary way genes are studied: how memes (ideas etc.) come into being, replicate in the minds other humans, respond to environmental pressures and survive if they benefit their host.

The development and transfer of cultural information which characterises the study of memetics could be seen in many forms of art, such as music and literature. Both seek to evoke emotion and aesthetic appreciation using a framework which has proved conducive for doing so (the otherwise arbitrary arrangement of tonal harmonies in Western scale, or the rhythm of iambic pentameter in sonnets, etc.) as each individual or generation takes up the mantle and innovates upon past achievements to share them with the world.

It’s hard to say when exactly the ‘memes’ of the form we mean, like the pictorial ‘virgin vs chad’ meme or the political compass meme, came to be (although the format probably doesn’t have a definite, linear beginning). Perhaps one day we will find a cave painting, scraped hastily and brutishly into rock, which enumerates the ‘chad’ features of Neanderthal society over that of the ‘virgin’ homo sapiens’. But all we can say is that the format is definitely now synonymous with the computer age, which has itself come to define the second millennia.

The lifespan of popular meme formats are like a microcosm of musical periods, where innovation takes place within the established format, passed round from group to group who do their own spin on it, before it becomes extinct –replaced by the new hot stuff (like the ‘average y enthusiast’ meme and the birth of the baroque period). The difference is that the test of a musical piece is whether it sounds good; the test of a meme whether it makes you laugh.

So: art, or nonsense? We surely can’t say that memes are nonsense, despite their frequent tendency to divulge into the absurd. As Elizabeth Bruenig has written, “To visit millennial comedy, advertising and memes is to spend time in a dream world where ideas twist and suddenly vanish; where loops of self-referential quips warp and distort with each iteration, tweaked by another user embellishing on someone else’s joke, until nothing coherent is left”.

For this recent tendency in creating memes is only done in a spirit whereby the absurdity of the world is mirrored comically back upon itself – and is there really more to what we can do and say in life than this?

Though perhaps memes are not ‘art’ in the strictest sense, either, because art makes a cult of beauty, and memes a cult of hilarity. Still, who could deny that making memes is a creative pursuit, drawing upon rules of text and imagery, like comedic literature or satirical drawing?

So, yes, dare I say your mum’s minion memes, and all of a catalogue of other strange and novel memes are valid forms of artistic expression (and I shall be hiding under my desk, away from all the hubris and ironical ugliness this admission will no doubt unleash upon the world). 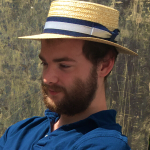 Scotrail offer students 50% ticket discount to get home for Christmas