Just three days ago the news that Munich´s own football arena is planning to show solidarity with the LGBTQ-community in Hungary by lighting up the stadium in a rainbow, broke throughout Germany´s national media.

The Hungarian community experienced a setback in their fight against discrimination due to the president, Viktor Orbán and the Hungarian parliament, establishing a new law that bans the possibility to inform about homosexuality and transsexuality in schools.

In addition, the law prohibits books, films and other (entertainment) content for children below the age of 18, in which anything besides heterosexuality is portrayed. Therefore, the law would effectively make the LGBTQIA+ community invisible to anyone younger than 18.

By lighting up the stadium, which is home to the FC Bayern Munich, in a rainbow on 23 June 2021, the EURO match day of Hungary – Germany, the city council and Munich´s mayor Dieter Reiter, planned to set a sign against discrimination and were to showcase Germany´s solidarity with the Hungarian LGBTQ-community.

The idea gained popularity quickly and was shared all over social media. Now, only a few days after the request went viral, it has been turned down by the UEFA on Tuesday, which said in a statement:

“UEFA, through its statues, is a politically and religiously neutral organisation. Given the political context of this specific request – a message aiming at a decision taken by the Hungarian national parliament – UEFA must decline this request”.

Right after the decision was made public, social media was flooded with angry comments and disappointment, especially since the idea was supported by so many, including German politicians, like Bavaria´s very own minister-president Markus Söder.

People are furious, in parts because the Union was somewhat expected to let the request go through, just due to all the pressure social media was firing on, but also because the UEFA supposedly stands for equality, tolerance and literally: “for everyone” as they ironically stated in a tweet from 2019 about the EURO 2020 (due to Covid-19, now in 2021).

But as one says it is not all black and white and the association surely has a good reason to decline the request. There are a few assumptions discussed on the internet, which include UEFA´s allegedly close relations to Hungary´s president Orbán, the principle to remain neutral as an organisation and the all-time favourite argument that sports, and politics should not be intertwined.

Or the downturn of that request could very much just be rooted in the temptation of money that is pumped in and out of the football associations across the continent and the world – it would be enough to shoot a quick look at a world cup that is set to be played in Qatar.

For that matter, it seems like the Union of European Football Associations is making a fool of themselves, declining an inquiry like Reiter´s, which is promoting morals, tolerance, inclusivity and equality – exactly what the UEFA says it stands for.

It does seem like the importance of equality and tolerance can only go as far as the outermost of the comfort zone of a company or association, just right until the money and advantages for itself overshadow human rights, peace and love and suddenly do not seem to be as important anymore.

Although, people´s opinions are differentiating a lot about Reiter´s request, Germany should be allowed to criticize Hungary´s decision to establish the law, and show solidarity with the LGBTQ-community, to set a sign and represent their own morals and views, just like Viktor Orbán does by enacting that law. The UEFA put itself in an extremely hypocritical spot here and is losing even more accountability by declining a simple inquiry like this.

Besides, it does put into perspective again, how the literal colours of the rainbow seem to be so much of a concern, that they would not be allowed to be lit up on the outside of a stadium during a football match. A little extreme, right?

On a good note, at least two other stadiums in Germany already decided to light up their own arenas in rainbow colours on the match day and some fans are planning to bring flags into the stadium to still support not only, but especially the Hungarian LGBTQ-community and set a sign against discrimination. 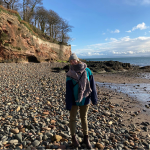 I am ashamed to hold her hand

Mother and daughter graduate together from Stirling University

‘News of the World’ Film Review