A local father has called for more action from Stirling Council to eradicate Giant Hogweed, after his son touched the harmful plant.

Jeff Davidson’s child suffered severe third degree burns after an encounter with the invasive species at a play area at Laigh Hills Park in Dunblane.

This left him “so distressed” after going through what the parent described as “absolute hell”.

Mr Davidson posted on Facebook stating his son’s recovery will take 6 months and will leave him with scars for the rest of his life.

He continued to say action groups and volunteers have fought for years to ensure obliteration of the damaging flowering plant, known scientifically as Heracleum mantegazzianum.

A few days later, Davidson wrote online again in a second Facebook post declaring: “No child should ever suffer pain like this…and I personally will ensure this never happens again to another child”.

In a statement, a Stirling Council spokesperson said: “We are aware of pictures on social media of a child who has suffered burns from a Giant Hogweed plant in Dunblane.”

“The images of the child’s injuries highlight the extreme dangers of Giant Hogweed and our sympathies are with him and his family. We wish him well in his recovery.”

“As soon as the Council was alerted to this incident, a Land Services Officer inspected Laigh Hills Park, Dunblane, on Sunday, July 25th, and found no evidence of the plant in the play area within the park. This was confirmed by a further inspection on July 26th.”

“Following a separate reported sighting of Giant Hogweed on Council-owned land along the riverbank within the Laigh Hills area, our Fisheries Team completed a treatment of the area on Monday 19 July.”

“Due to the serious health hazards posed by Giant Hogweed, we always act quickly on any reported sighting on Council land, and our Land Services and Fisheries Teams regularly assess and treat areas of concern across the local authority area. Landowners are responsible for the plant growing on their land.”

The spokesperson added: “Forth Rivers Trust was involved in a Giant Hogweed eradication scheme in recent years, on private land, but this was funded by national agencies, including Scottish National Heritage and SEPA, not the Council.”

“We can confirm that the family have been in touch with the Council about this incident and Council Officers have liaised with them about this distressing matter.

“We would advise the public to be extremely careful around Giant Hogweed and to report any sightings on Council land to us via our online form or by calling 01786 404040.”

Giant Hogweed is often mistaken for cow parsley or elderflower but can be distinguished due to its structure. Its features include a purple-hued stem, thin spines and spot covered leaf stalks. The plant can grow up to 3.5m high and span around 1m.

It is detrimentally different due to the ability of the chemicals in the plant sap causing phytophotodermatitis or photosensitivity. This leads to the skin becoming sensitive to sunlight.

The NHS advises the public to cover and wash the affected area with soap and water if contact is made with giant hogweed. They should also seek medical attention from a doctor if they feel unwell.

A leaflet from the Scottish Invasive Species Initiative is available for more information on how to identify Giant Hogweed. More details can also be found on the GB non-native species secretariat website. 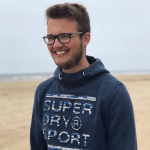