Prime Minister Liz Truss faces major backlash after Sky News interview with one reason among many being her casual white trainers.

Political journalist Beth Rigby sat down to put Liz Truss through a brutal questioning regarding her first days in power. Other than Truss’s poor answers, there seemed to be a lot of attention drawn to her choice of footwear. The public took to twitter to question Truss’s white trainers.

Truss seems to be causing more havoc as her days pass as Prime Minister. And that’s not only with her shoes. Rigby laid into Truss, saying: “This is surely the worst start of any prime minister.”

Rigby continued to lay into Truss with the talk of mortgages. Rigby asked whether Truss had a mortgage which she replied: “I do.”

Rigby then asked: “And do you have an issue about remortgaging?”

Truss, who stumped at the question and awkwardly half laughed, replied: “Well I, I, I mean I do have a mortgage, yes I do.”

Rigby also criticised Truss for her policy U-turn: “You established a 33-point lead for Labour in the polls, and now the ‘lady not for turning’ has announced a massive U-turn on a policy.

From inadequate interview answers to policy U-turns and poor footwear choices, Truss seems to be becoming more unlikeable each day. 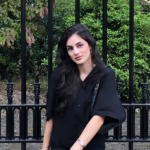