Alice Oseman is best known as the creator of hit graphic novel series and Netflix show Heartstopper, which follows teenagers Nick Nelson and Charlie Spring through a journey of first love and self-acceptance.

While we do get glimpses of Nick and Charlie’s relationship within the novel, Solitaire primarily focuses on Tori Spring, a sixth former battling undiagnosed depression. Tori’s life is mundane. She wakes up, attends school, and spends time online before falling asleep. It’s only with the introduction of Solitaire, a group of pranksters causing havoc in her school, and Michael Holden, a fellow student hell-bent on becoming her friend, that Tori’s status as a wallflower begins to change.

I loved this book. It wouldn’t be right to describe Solitaire as a rollercoaster, because so much of it is told in Tori’s calm, levelled tone. It isn’t particularly fast-paced either. But what stops it from becoming boring are these vivid, eclectic segments that crop up throughout the narration. As Solitaire’s pranks go from harmless to frightening, Tori’s outwardly apathetic projection falls apart. She experiences vibrantly written, viscerally frightening panic attacks that draw the reader into how she’s feeling. You feel like you’re there with Tori through her scattered thoughts and panicked observations. It makes the book’s portrayal of mental illness that much more effective.

Oseman’s writing style also works to her advantage here. If you’ve ever read one of her novels, you’ll know they’re generally easy reads. Dialogue-heavy and simply written, I’ve been able to finish the majority of her books within a day. Yet her books have a wonderful ability to tackle heavy topics with sensitivity and awareness; Solitaire is no exception. The story touches upon difficult topics such as homophobia, bullying and mental illness. By writing the story from Tori’s perspective, however, Oseman is able to organically weave these elements into her life. It never feels melodramatic or overblown — instead, it feels realistic. That’s one of the main strengths of Solitaire. Everything feels so real.

I’d recommend this book to fans of Alice Oseman and the YA genre in general. Its tone is comparable to that of History is All You Left Me by Adam Silvera or What If It’s Us by Colleen Hoover; a great deal darker than most YA offerings, but still deeply enjoyable. 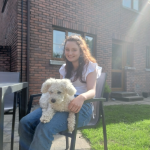 The return of Italy's far-right