Highly anticipated, the Royal Mint recently introduced commemorative five pound and 50p coins bearing the King’s new portrait. The new coins will be part of a wider memorial coin collection after the passing of Queen Elizabeth II last month. The memorial coins have been on sale to collectors since October 3rd.

New coinage largely following traditions of the past…

The Royal Mint has been producing coinage since the 9th century, during the reign of Alfred the Great. The new King in many respects has stuck to the coinage traditions. With the new monarch’s portrait facing to the left compared to the late Queen (the Queen’s father, George VI also faced to the left). In line with previous Kings, Charles’ effigy is not wearing a crown.

British sculptor Martin Jennings designed the effigy. Jennings used a wide range of photographs of the former Prince of Wales instead of one sit-down portrait which was common practice before. According to the Mint, King Charles personally approved of the design. Jennings, who’s previous sculptures have been on the poet John Betjeman at St Pancras Station and the novelist George Orwell outside BBC’s Broadcasting House said, “It is the smallest work I have created”.

However, in breaking from 1000 years of tradition: the new coins will not bear King Charles’ name in Latin. Vale Carolus! The decision was for the new coins to be “accessible” to the public. This is part of the new King’s desire to modernise the monarchy.

When will the new coins be in mass circulation?

The new coinage is expected to enter circulation in December this year and will go alongside the 27 billion coins bearing the late Queen’s portrait. The expectation is later designs will be realised in the coming months. The Royal Mint has confirmed that there won’t be any sudden replacement of coinage. Before decimalisation in 1971, coins bearing previous monarchs still took pride of place alongside the Queen’s coinage. 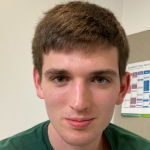 Who will care about us? - A Love letter to Ukrainian cinema