The Students’ Union is hosting their own Taylor Swift themed night on November 18, from 8pm until late. The one-night-only event will take place in celebration of Swift’s latest album, Midnights, and will include exciting activities like: a Taylor-themed karaoke in Studio, a Swiftie disco in Venue, Taylor-inspired cocktails and shots and photo-ops in Studio and Underground.

Sections of the Students’ Union will also be decorated on-theme with some of Taylor’s biggest albums and eras from over the years, creating an immersive experience that’s sure to be any true Swiftie’s wildest dream.

There will also be a raffle held on the night, which will cost £1 per ticket and £4 per line – both cash and card are accepted. For the lucky ones, prizes up for grab include: two One4All gift cards worth £25 each, a bottle of champagne (Diet Coke for under 18s) alongside a gold glass, a Taylor Swift themed gift basket complete with a Midnights tote bag, a Folklore candle and an elusive mystery box.

Whether you’re a die-hard Swiftie or just looking for a fun night down at the Students’ Union with your friends, Stirling Uni’s first-ever Taylor Swift night is going to be one for the books. 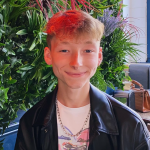