On a bright and clear Sunday afternoon, the Stirling Clansmen American Football team took on Leeds Beckett Carnegie in a one-sided game that ended in disappointment for the Clansmen.

The game started poorly, with a fumbled kick return that resulted in Leeds getting the ball on the Clansmen 30 yard line. Leeds capitalised on this mistake and scored on their first offensive play; a run left that saw number 23 dance into the endzone untouched.

Jackson Homes got the start at QB, hopeful to repeat his heroics from the Newcastle game, but struggled early adjusting to an undercentre offense.

A fumbled snap by Homes led to Leeds regaining possession and scoring again, making the score 15-0 in only 9 plays.

The game spiraled for the Clansmen from here on out, with the defense being forced to put in a huge shift throughout the day with limited bright spots on offence.

The game ended in a final score of 69-0 to Leeds Beckett.

Offensive Coordinator Gordon Wallace had this to say after the game:

“Obviously it’s never ideal to end the game with zero points on offence, but with some players starting in unfamiliar positions – and some starting for the first time in their playing careers – there were definitely positives to take.”

The Clansmen will travel to Newcastle in a must-win game on December 11. 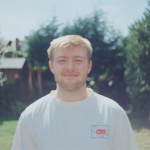 The only way is up