Ukraine’s Tourism Minister, Mariana Oleskiv, has recently declared that the country is already preparing to welcome tourists to the zones that the war has made famous around the world.

In what looks like an act of foresight and optimism, Ukrainians are already preparing to welcome the wave of tourists they expect to receive as soon as the war is over. But are they just being optimists, or are they trying to take advantage of the atrocities that the war has brought to their country?

Apparently, they will try to direct this campaign to the countries that offered them help. Sort of a “Thanks for your help, now please come and spend your money here” kind of thing. However, they are doubting if they should wait a little bit to launch this message, or if it’s already time.

According to Ukraine’s Tourism Minister, Mariana Oleskiv, they already have a plan to convert the current war zones into tourist destinations.

In a recent interview, she mentioned that the zones of Bucha and Irpin, in which over 700 civilians died during the Russian invasion, as well as Chernobyl, would be one of their focuses and that they would offer “new products” – sorry, new… What? – Definitely an attraction for those who like ‘dark tourism’, to say the least.

The Minister also declared that because of the war, they will have to focus on medical tourism, as the conflict has caused many wounded people to need rehabilitation centres. She even mentioned that this will offer “interesting options” for investors.

Considering the amount of suffering that this country has gone through, their desire to get back to normality is understandable. Their tourism industry already suffered a big hit when Russia occupied Crimea in 2014, which shows that political instability can really affect a country’s tourism. But an actual war with a neighbouring country is a whole different thing.

Speaking of which, Oleskiv mentioned that they are also “trying to focus on how we see Crimea after the occupation”, and that even though she doesn’t know when or how they will make it happen, their goal is to return Crimea to Ukrainian sovereignty, even if, “of course”, it’s the last territory they get back.

In other and more clear words; if hope was a country, it would definitely be called Ukraine.

During her interview with editor-in-chief of Investment Monitor, Courtney Fingar, Oleskiv really made an emphasis (a big emphasis, by the way) on the “lot of investment opportunities” that Ukraine is soon going to offer. She insisted that the possibilities would be extensive, even saying that investors didn’t have to wait to invest, they can already find opportunities now.

That doesn’t sound desperate, at all. She even acknowledged that these investments may be “kind of risky” – but give them your money anyway, pretty please.

Additionally, Oleskiv not only absolutely crushed Russia and the country’s political choices during that interview, she also stated her opinion that Putin’s country is on its way back to “reincarnate the Soviet Union”, even if the president is removed.

Her declarations towards Russia were very harsh, even a little brutal, as she declared “you can’t even be sure of your own safety in the country”. Probably a good idea to take Russia off your travel bucket list, then.

The Minister declared that Ukraine’s interest in rebuilding their tourism is believed to help the recovery of their economy, but they also have the intention to build commemorative monuments in the places that have been affected the most by the conflict, to show the atrocities that Russia committed against Ukraine. Take note of the addresses, as those will probably be the most visited destinations by future tourists. What will the opening times be?

We understand that Oleskiv is just looking out for her country. With her declarations of opportunism and hope, she’s only trying to help Ukraine recover from the war. However, maybe being a little bit more subtle about her feelings, especially those towards the riskiness of investing in a country that still is, as of today, in the middle of a war with one of the most powerful countries in the world, would be helpful.

Not only that, but it all may just be a little too soon. According to the UN, in October there were still almost eight million Ukrainian refugees spread across Europe, almost 20% of the population of the country. Not to mention the millions of people who are still stranded within Ukraine because they either can’t afford to go back home, the routes they need to take are impassable, or they are still in the middle of an ongoing fight.

Maybe helping the natives to return to their homes would be the first step towards what will likely be a very long road to recovery. 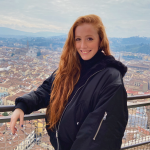 Who will care about us? – A Love letter to Ukrainian cinema