It was entirely by chance that Angela Reed, a fourth-year social policy student at Stirling, met one of the most famous CEOs in the world.

Apple boss Tim Cook made a stop at the Buchanan Street store in Glasgow earlier this month when Angela, 45, just so happened to be there.

Angela, who lives with cerebral palsy, wanted to pass on her thanks to Mr Cook for the pioneering work Apple has done in making its products accessible to people with disabilities.

She uses her iPad and iPhone as tools to help her communicate, due to having difficulty with communicating verbally, and can also use these along with her iMac to control her home.

Speaking to Brig, Angela said: “I was in the store when he arrived. I asked my store assistant to pass on my thanks, but he got a manager to get me to see him.”

After that, a bit of a media frenzy ensued.

“The Scotsman wanted some details,” Angela explained. “I wasn’t mentioned on the Wednesday but then on Friday there was a big item about me specifically.”

The Scotsman ran a feature on their website on February 10 with the headline ‘Apple boss Tim Cook takes inspiration from Scottish student’. 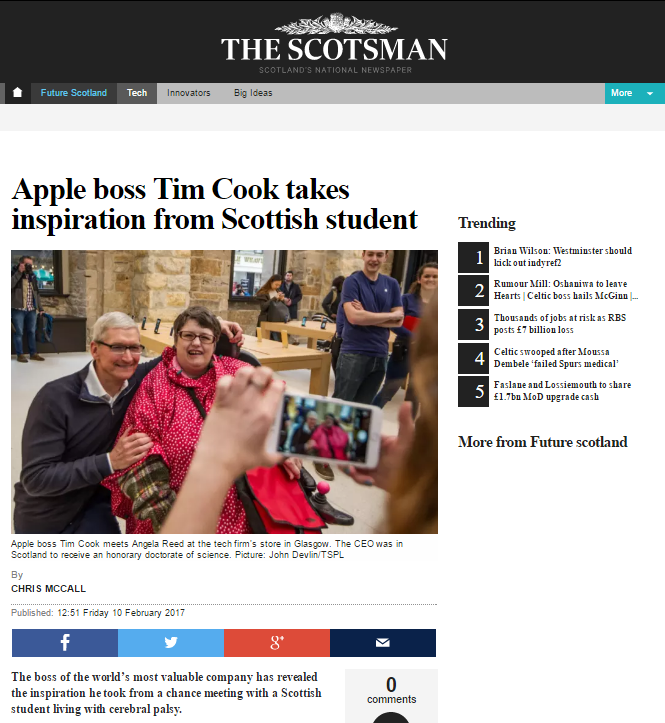 Angela asked the world-famous CEO: “Are you aware just how much Apple have done for disabled people?”

She said Mr Cook was “lovely” in person, adding that he thanked her and said “it meant a lot to know that what they’re doing is actually making a difference”.

Apple – the most valuable company on the planet – has blazed an innovative trail in accessibility technology, including Siri, an intelligent voice-command virtual assistant on all Apple smartphones which helps people with visual impairments, and VoiceOver, a groundbreaking screen reader that allows people to use smartphones without seeing the screen at all.

Angela, who lives in Clydebank, also uses her Apple technology to help with her coursework, coming into uni one day a week. “My supervisor is happy to let me work at home,” she explained.

Her dissertation is an analysis of how newspapers are reporting on working age disability welfare reforms.

“People don’t know that support is being cut, such as access to work that provides equipment so employers don’t have to,” Angela said.

“There is a rise in hate crime aimed at us because of ‘scrounger’ rhetoric.

“I am comparing between tabloids and broadsheets across the political spectrum.”

Even before starting her course, Angela has been a regular face around campus for years. “I’ve been here forever!” she said.

Angela has lived with cerebral palsy all her life. “I’ve never known any different,” she added. “So I don’t know what to compare it with.”

Some nationalists are more divisive than others

British expats returning to the UK for university - culture clash or homecoming?