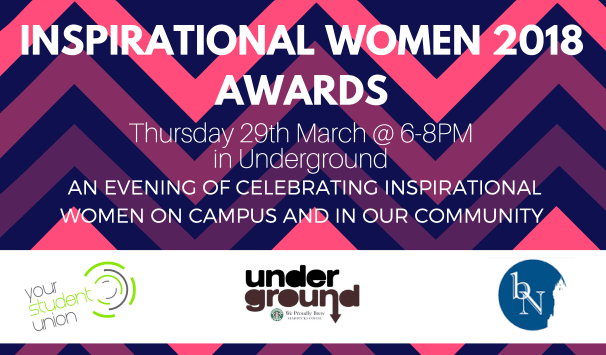 The winners of the Stirling Students’ Union’s first Inspirational Women are being announced tonight, and Brig can exclusively reveal the winners.

Brig was an official partner of the awards, and we have interviewed the winners for each category.

After telling being told that she had won the award, she said: “It feels amazing and also quite strange to be recognised and awarded for doing things I enjoy doing, like running the women in STEM society.”

One of the key questions behind the award was how Western felt being a woman and how it impacted her in the field of science. She mentioned that she had not really noticed anything major, “as biology degrees tend to be female dominant”.

However, Western also mentioned that “there is a lack of female role models past degree level where it is quite difficult to imagine yourself in senior positions”.

Asked about her plans after graduation, she stated that she wants to do a masters in nutrition.

“I am also interested in being involved with research into how food and lifestyle are linked to disease, and working with projects to prevent disease via making nutritional information more accessible to all”

Her final words were advice to women everywhere, based on her experiences so far.

“Take every opportunity you are given that could help you in the future – like volunteering, being involved with societies, taking training and courses that are available.

“Also don’t be afraid to have interests and hobbies outside of your degree as you may find another area you enjoy more than what you are specifically doing right now.”

Dr. Heather Price is an Environmental Geography lecturer at the university, teaching specifically on the modules of Global Environmental Issues, Environmental Hazards and Contemporary Issues in Environmental Geography.
Currently, she is working on two main research projects alongside her teaching: investigating water access and water quality in informal settlements (or slums) in Malawi, and using creative methods (like theatre, art and storytelling) to explore people’s understanding and experience of air pollution in an informal settlement in Nairobi, Kenya.
Price loves the teaching she does here, not only because it works well with her research, but because she strives to teach her students how to be global citizens; environmental champions with a passion for lifelong learning about the world and the people that inhabit it. She works hard to act as a role model for her students, and can say that she is incredibly thankful to be receiving an award like this.
While women face challenges in workplaces around the world every day, Price emphasises that in her field of Biological and Environmental Sciences, it’s great to be part of the growing number of women in STEM that really support one another.

Kim Guthrie has been playing football since she could walk and truly believes that joining the football club in her first year was the best decision she’s made at university.

She’s been on committee for every one of the last four years, having spent the last two – true to her awarded title of Student in Leadership – working as president of the club.

Guthrie says that she really does put a lot of effort into being a good leader, and hopes that everyone sees that she does truly have everyone’s best interest at heart.

Throughout her two years as president, Guthrie has continuously worked to create equal opportunities for every member to play and enjoy the sport, attending to both better training facilities as well as the creation of an additional third team.

Guthrie feels that, as women in such a male orientated sport, she and her teammates constantly have something to prove when they walk out on that pitch. All the negative stereotypes and jeering comments they’ve faced, however, only make them better, stronger and more confident as a team.

She said, “I am really proud to lead a team of women that are all so open and accepting. We play with our teammates, simply because they are our teammates. They are all just people, no matter their sexuality, and we don’t even think twice about ensuring that everyone is included.”

Munirah Al-Abdulelah is a Jack – or Jill if you prefer – of all trades. She has a joint bachelors degree in Accounting & Finance from the American University of Kuwait (AUK), and founder of her own flower and decoration store called Mirror Store.

Munirah believes her faith and her self determination are key to her accomplishments. Having to overcome some stigma and obstruction in Kuwait when she chose to study abroad in Stirling, she managed to ignore the naysayers through believing in her values. She has been brought up to believe that “there is no difference between man and woman in the ability to succeed in a career”.

She was the president of the Cooperation Club at AUK, organizing amongst other events trips to Mecca, and is now the president of the university’s Islamic Society, where she works closely with the international society, volunteers, and offers Arabic lessons and excursions.

Munirah’s mentality is that all humans are equal, and therefore able to be anything they choose. Her very aura opposes the stigma of categories. She says all persons should have the freedom to choose their destiny, whether they want to pursue a career or hobby, raise children, or both.

Shannon Scovel, 22 years old and a native of North Carolina, has been part of the Stirling community for less than a year and she has already made a name for herself. Part of the triathlon team, Brig and Air3 Radio, Shannon has made the most of her short time here.

When asked how she felt about being shortlisted, Shannon had this to say:

“It’s pretty cool – I didn’t even know I could possibly be in the running for something like this!

“I’m also really impressed with how quickly the Union put this event together, I can’t imagine the work that went into promotion, organisation and nominations! It’s just neat to be a part of it and watch it all come together.”

When it was revealed to her that she had actually won the International Woman award, her reply was a stunned, “oh that’s cool!” When further prompted, she humbly said: “Really, it makes me feel guilty, because there are so many women I think should have won this award.”

Scovel is admired by her peers, who were only too happy to rave about her in the writing up of this profile.

“Its a real honour to win this” she said.

“I know so many fellow inspirational students who are involved in sport who have helped me through my time at university.”

When asked how being a women has impacted her role in sports, Blemings expressed her active work in leadership: “These roles are often gendered, so its great to help break down those barriers and influence other women to take leadership roles sport”

“At the end of the day, if you love a sport and have passion for it, you should be able to take part without any judgement based upon your gender. When we hit that stage, women in sport will become unstoppable”

Fourth-year Sociology and Social Policy student Henrietta Mochrie is a well-known figure at Stirling and the winner of the Equality Champion Award.

Upon finding out she’d won, she was quite surprised and explained: “I do a lot of activism on campus; I was part of GEM and I was down at the picket lines during the strikes. When I’m there, though, it feels like I’m not doing enough, I always feel like I could be doing more.”

She works as Disabled Equality Officer for the Students’ Union, where she is currently striving to make buildings on campus more accessible for students with disabilities. She was also elected as an NUS Delegate in the recent student union elections.

Being a transgender woman, Henrietta’s university experience has been different to that of cis-gender women. Coming out in her third year, she was dealing not only with mental health issues at the time but noticed people were treating her differently.

On a final note she emphasised the importance of intersectionality: “Equality isn’t exclusive to just one group of people, it’s something we should want to achieve for everyone who needs it.”