Stirling Uni star Craig Brown says that winning the BUCS Premier North is his “best achievement” as a footballer.

A week after clinching the league title, the midfielder reflected on the dramatic season finale against Nottingham Trent University:

“Personally, I’ve never won a league title before so this was amazing. It’s probably the best thing I’ve done in football so far.

“For the team it’s great recognition for us, but it’s also a great confidence boost. With the BUCS cup coming up, this shows that we can compete with some of the best teams in the country.”

Brown scored the winning goal in the 88th minute of the game, in Stirling’s 1-0 victory:

“It was a frustrating game, to be honest. They only needed a point to win the league, so obviously they took their time. Whenever the ball went out of play they weren’t rushing to get it back on the pitch.

“We always thought we could beat them, but when they are playing for a point, you get worried you might not break them down. We had chances all through the game, but we couldn’t take the lead. You just need to be patient.

“Thankfully the chance came. The ball fell to Kieran (Hall) and I was in a bit of space. I screamed for the ball and thankfully I scored.

“Obviously I was buzzing to score, I don’t really remember the rest of the game, it was a bit of a blur.”

Brown, who is a 3rd year student from Troon, says the victory will give the team a lift heading into the final part of the season.

“I think it gives the boys a ten or twenty per cent boost going into the rest of the Lowland League games. We’ve been 10th most of the season but I think we could move up with the momentum from this result.

“We know we can grab late winners, which we’ve done a few times this season.”

Although Brown will claim the plaudits for his goal, he says the whole squad deserve the same recognition:

“With so many games we need to use the whole squad, but that’s not really a problem. I wouldn’t say we have a starting eleven that is better than any other, so many boys can interchange. We probably play more games than anyone else in the Lowland League.

“The team also have a really good camaraderie, which is so important, especially when you’re travelling so far to play BUCS games. As soon as the game finished on Wednesday we cracked open the champagne and the beers. The bus journey back was a lot of fun.”

Manager Chris Geddes was delighted with the result, and speaking after the game said:

“I’m just delighted for the players. These sorts of things don’t happen very often to footballers, if you’re involved in University football this is massive thing. For us to be winning the Northern League playing against some of the top universities in the area is great.” 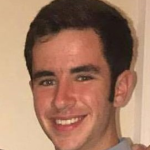 Champion students out in semi-finals after title defence