To her 1.7 million Youtube subscribers, Molly Mae’s channel is a form of escapism. It’s humble and warm.

Last year we followed her on her journey from how she coped during the national lockdown, her rollercoaster discovery finding a cancerous skin mole, ongoing house-hunt with boyfriend Tommy and passing her driving test. Her joys and achievements became ours as we celebrated alongside her.

Despite the obvious fame and fortune, she’s a normal 22-year-old girl, but some of us seem to forget this along the way.

After a clip taken from her appearance on the Diary of a CEO podcast went viral, where she referred to everyone’s ‘same 24 hours in a day’, Molly Mae came under fire once again.

The clip was perceived to be an ignorant comment failing to acknowledge those that come from different social and economic backgrounds, and how these are barriers to success. Millions took to Twitter expressing their anger, vehemently claiming that her success was only down to privilege and chance. But some of the trolling was personal and cruel, poking fun at her dog- who died in 2020- and last year’s house burglary.

When her house was ransacked and £800,000 worth of goods were stolen: she was blamed for sharing her life -and luxuries- online. Whilst grieving the death of her dog six days after bringing it home: her and Tommy were held responsible for engaging in puppy farming rather than adoption – with some viewers claiming they got what they deserved.

It leads us to question whether her place in the public eye justifies being terrorised by Twitter users and the red-top tabloids. Are we envious of her success? Or do we just look down on the means that thrusted her into the spotlight?

Her debut in Love Island – season five in 2019 – was the most-watched season to date, with an estimated 5.7 million viewers per episode. Though she had a substantial following beforehand (around 100,000 on Instagram), she has since become one of the most popular contestants and was offered a seven-figure deal to become creative director of Pretty Little Thing at the end of last year.

She’s been transparent about using Love Island as a business move. She was smart enough to acknowledge that it would present opportunities. Despite this, she is still branded a ‘game player’, and criticised because her version of ‘hard work’ does not conform to conventions or normality.

The backlash led podcast presenter, Steven Bartlett, to jump to her defence on Twitter. He wrote: “I’ve had male guests say what she said. No one cared. But when Molly says it, she’s crucified. Gender issues aside, the standard we hold Molly Mae to as a 22-year-old that’s figuring out the world is absolutely outrageous.”

Complaints to Ofcom increased by 124% following Faye Winter’s outburst last season. The night the episode aired, almost 25,000 complaints were recorded – the most received for any Love Island episode.

Despite the fact that producers were partially blamed for the miscommunication, she was branded ‘Hurricane Faye’ and was trolled viciously – with most comments targeting her physical appearance. It’s notable that bombshell Danny, who’d been caught using racial slurs in an Instagram post in the past, only received 1,500 complaints.

Though all three were exposed to different forms of hate and trolling – the common denominator is them being young women with the potential to be great successes. A show with 95,000 applications per year, big brand sponsorship deals and a £50,0000 cash prize is always bound to attract media attention – but why is it more bad than good? Why is it seemingly justified to terrorise someone just because they have a blue tick?

After a brief week of silence waiting for the storm to pass, Molly returned to social media with a statement of apology and a promise to do better. Shortly afterwards, she was posting again as normal – like the stint of being Twitter’s villain was merely a bump in the road.

Maybe part of the hatred for ex Islanders is the confusion – What is their job? How have they gotten so lucky? Regardless, it doesn’t warrant the constant trolling and scrutiny. Maybe their version of ‘hard work’ within their profession is having to deal with us, the ones that don’t understand it or respect it. Maybe they deserve more credit for that. 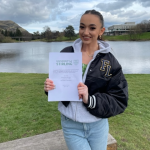