A couple of years ago, I fired up the projector for a Halloween ‘fright night’ with a big group of friends. After gorging ourselves on ghost cookies and generous helpings of pumpkin pie, we dimmed the lights, got cosy and settled in to watch some horror films.

After watching our first film, the room was nice and relaxed, everyone was enjoying themselves. We then started Paranormal Activity.

What followed was ninety minutes of screaming, heart palpations and more than a little terror…

Set in Suburban America, young couple Micah and Katie are busy settling into their new home. However, it’s not all sunshine and roses.

Katie claims to have been haunted by some sort of ‘presence’ during her childhood and attributes some recent sleepless nights to its return.

Micah sets up a camera in their bedroom to ease her nerves, as apparently, the presence is most active in the twilight hours.

Over the following weeks, the camera records the couple sleeping and begins to capture unsettling events during the night.

These occurrences quickly ramp up in both scariness and frequency, building towards their climactic endpoint.

Although its use has certainly become clichéd within the horror genre, the found footage style is undeniably effective at creating a home video feel in Paranormal Activity.

The sense of unease you get when watching this film is definitely a product of this filming style, it creates the allure of realism, even if the film is about paranormal events.

You may be used to in-your-face jump scares and VFX, but these scares are subtle.

Rather than a hulking, drooling, horrifying monster, there’s a slight knock at the door, flickering lights or footsteps on the stairs.

These mini-moments are almost torturous, but they’re effective in creating dread at even the slightest noise as the movie continues.

Scared of the Unknown

The general unease this film stirs within you also stems from its focus, a couple being haunted whilst they sleep.

Sleep leaves you in a very vulnerable state, unaware of what is happening around you.

Some of the creepiest moments in the movie result from the fact that the protagonists aren’t aware of what is going on. Even if the problem is in the same room as them.

It goes without saying that it’s damn hard to go to bed after seeing this film.

I think watching this with a group is the best way to experience this film and is probably the reason I rate it so highly.

The film’s pacing makes for a rollercoaster of fear. The beginning of each night is announced on screen, providing some time for the anticipation and dread to set in for what you are about to witness.

What follows is an often deeply unsettling or downright terrifying series of events, before the film cuts to the following day.

There was always a collective sigh of relief when we ‘survived’ another night, with the next few minutes of daylight providing a much-needed respite before the following night began.

These peaks and troughs only become more dichotomous as the film builds and builds, leaving you exhausted by the end.

So what’s the moral of my Halloween trauma?

It’s a great excuse to watch an exciting but often neglected genre of films, with all the funny costumes and themed food amplifying the spooky atmosphere.

Paranormal Activity is a great addition to any fright night, as long as you don’t mind flinching at every little bang and thump in your flat for the next few days. So grab some friends (literally), go have some fun and try not to shit yourself when the monsters come calling… 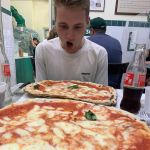