The Central Scotland Documentary Festival at the Macrobert Arts Centre shows the only screening in Scotland of No One Told Me – a raw and emotional look into the true aftermath of childbirth. Following the family of Elise and Marc and their new-born daughter, this documentary bares its soul along with its subject.

There are many stories that depict the joyfulness and happiness of bringing life into the world. However, there are few that tell you the harsh reality that comes with it.

From uncontrollable crying to the physical pain that breastfeeding can cause, Elise lets cameras into the journey that is becoming a mother.

The beginning has audiences involved in the process of childbirth, more accurately waterbirth, with emotive music and the sound of a mother crying. It is a roller-coaster of emotions.

The poignant moment in this family’s life is emphasised when all the music stops at the sound of their child’s first cry.

Throughout the documentary, they track the progress of the family through days that appear on screen. From the beginning the formula is quite strict, however, as time moves on there are large jumps.

Indicating the family’s feeling that they are losing time, the pair said they felt as though they were losing control over their own time and bodies.

Through immersive camera techniques the audience is made to feel as though they are with the couple experiencing the ‘challenge’ at hand. As this documentary is filmed without any interference from the outside world, the viewers get an untouched view of the reality of having a newborn.

When talking of the reasoning behind creating the documentary in such a way on the documentary’s personal website, director and producer, Zulilah Merry said: “No interviews, no looking back, just being in the moment with her. Showing future mothers and their support system what the postpartum period can look like.”

Although the documentary does show the physical and psychological toll that having a child can bring, the lightness and joy is also seen throughout. The constant support of Marc to Elise, their continuing teamwork and problem-solving YouTube videos when both are stumped on baby carries.

The viewers see consistent loving moments shared when the family, including a dog, are huddled together exhausted in bed.

This heart-wrenching and heartwarming story of a family coming to grips with life after birth will have you crying, gasping, laughing, and loving along with them.

This is not a cautionary tale of having a child, rather a preparation for the joy and hardships to come for soon-to-be mothers and a help guide for those around to support and love them. There is no confusion as to why this important documentary won the Jury Award this year. 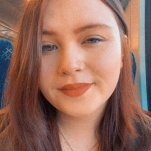