What with it being the Greatest Show on Earth*, it was probably unsurprising that the first hustings of this year’s Union elections cycle had a few first-day jitters.

There was a big long table in the Atrium where the inquisition – post-grad officer Aidan Miller and Stef Black, head of the Elections Committee – sat; a big scary podium; chairs next to the podium for candidates to sit on like job interviewees and lastly, all of us lined up in rows looking at them. It looked a little like this (minus Andrew Kinnell’s head).

(All photos in this report come from facebook.com/stirlingstudentsunion) 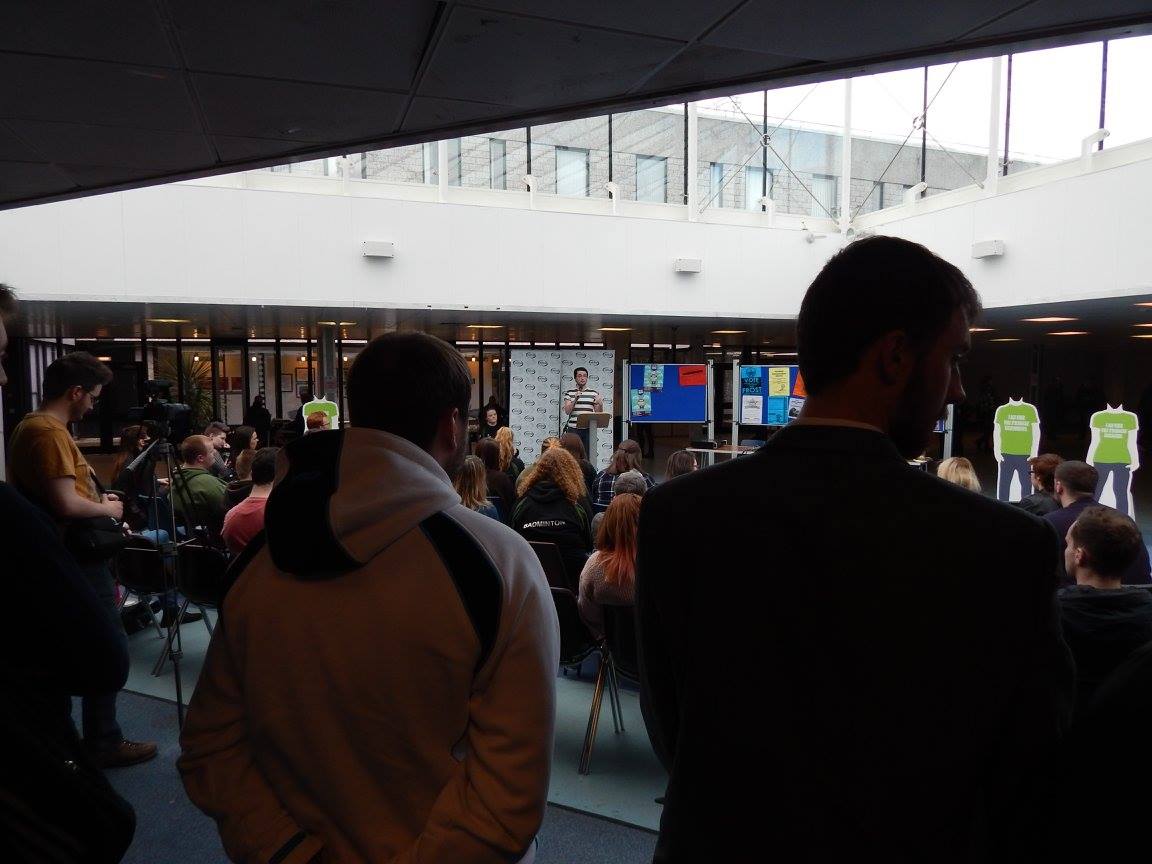 Without further ado, let’s look at how each of the candidates fared.

First up we had Jess Logan. She set out her stall by talking about all her experience in a wide range of clubs and societies, saying that as a result, she already had a good idea how the Union worked.

In terms of how things could be improved for clubs and socs, Logan talked at length about improving club storage, arguing that it wasn’t practical for most societies that storage space closed after 5pm.

She was quizzed on her meat-free Monday proposal, a topic which is sure to come up again, as well as on whether it was fair that media societies got more funding than others. Ever the diplomat, Logan said in an ideal world “all societies should get more funding”, but that given what media socs contribute to the Union, current funding was fair.

Next up, Emma Binns. She also cited her experience in societies, talking about her time as President of the LGBT+ society and her belief in equality.

She had a pretty good soundbite for us media types – “The Union should be every student’s best friend”. She also agreed with her rival that club storage could definitely be improved – and that she didn’t even know until recently, as a society President, that she even had club storage available to her.

She also touched on her policies for expanding the Green and Blue Space.

Verdict: Both seemed very nervous, especially Jess Logan. But both acquitted themselves well, and will hopefully only get better. No clear winner.”

Matt Adie was first to the podium, and set out his “broad manifesto”, including making more car parking space, improving assignment feedback, and sorting out the “shocking” condition of some seminar rooms, in both Cottrell and Pathfoot, which he described as not up to standard.

He also said that due to the fact no one is standing to replace Aidan Miller as post-grad officer next year, more needs to be done to support post-graduates. Asked about the Students As Researchers (StAR) initiative, he said it was “an opportunity”, but that both students and staff needed to show more interest.

Finally, questioned on his green credentials, he stuck to his guns on enlarging car parking space, saying he would look at other “sustainable” green policies (while never quite outlining any).

Following Matt was his rival Ashley Cameron, who laid out her experience with NUS Scotland and bigged up her non-traditional student status as someone who has come from a disadvantaged background. At 26 years old, she’s also a mature student. (I like to keep this quiet, but so am I. Although I’m not sure I can legitimately call myself “mature”.)

At its core, Cameron’s case was built around improving communication in all possible areas, and emphasised that this needed to be more than one-way. “It’s your education,” she said more than once.

Verdict: The proposals within Matt Adie’s pitch were arguably the more concrete, but he was a wee bit wobbly on the green question. Ashley Cameron displayed a lot of passion and knowledge but could do with zeroing in on a few more policy specifics. Both extremely capable and confident. I hate to be a fence-sitter again, but no clear winner.”

Alex Frost launched the Presidential Hustings by calling for the Union to open up to student feedback through an “ideas forum” as part of an overarching campaign to modernise communication between the Union and students.

He also said students feel like they’re “not being taken seriously by the University” and said that club autonomy had been neglected in recent years.

The sales pitch of Dave Keenan proved to be a popular one – namely, that students deserve fairer rent and a more accountable University, saying that most of us will never meet the people at the top until we graduate.

On fair rent, he was asked where he had been whilst Andrew Kinnell had been campaigning for it all year. Keenan dealt with this fairly well, citing political activity elsewhere for the SSP as well as mentioning personal illness.

Finally, Craig Forsyth took to the podium to agree with Keenan that rent was “the single biggest issue facing students today”.

On top of that, he emphasised the need for the Union to provide “a safe and affordable night out for all of us”, comparing us unfavourably to Dundee, whose Union he said had one of the best and cheapest nights out in the city.

He also defended his policy on sensitivity training for clubs and socs, saying previous national scandals and embarrassments for the University showed the need.

Verdict: A tricky one to call. Presentationally, Keenan was undoubtedly the most experienced, and his messaging was on-point. Alex Frost struggled at times, although rumour has it the poor guy was suffering from food poisoning. Forsyth was full of substance and passion, even if not quite as skilful as Keenan.

“As a brief aside, it was amusing to watch Forsyth, Co-Convenor of the Stirling Uni Greens, and Keenan, campus socialist firebrand, solemnly swear to political neutrality if elected. I’m willing to give them the benefit of the doubt, but Frost was more believable on that front.

“Who won? A toss-up between Keenan and Forsyth. Dave might have just shaded it.”

Finally, to Sports Union President. Our current office-holder Jess Morris was first up, and talked about how much she’d loved her first year in the job and bigged up her work supporting smaller clubs and promoting sporting successes through #BLEEDGREEN.

She said she has “built up links” to maintain and improve facilities and said there has been progress in communication between sports clubs and media societies, but also discussed the problems sports unions are having across the country with regards to kit.

First challenger Steven Watson started with a strong pitch about elitism, claiming to have helped get rid of it from the Badminton club during his time at the Uni.

He said that all 54 clubs in the Sports Union have “different needs”, and said there should be a focus on helping clubs improve their marketing and external fundraising. He also something needed to be done about the “horrible” Gannochy tennis hall floor, which he joked you could slip and die on.

Greg Mihill was next up, and set out his stall as champion of the small clubs, arguing that we should get their names out more, and that there are funding options that many smaller clubs didn’t even know about. “Small clubs with funding could do so much more.”

When asked what the biggest issue facing the sports union was, he said that it was range and quality of kit, which he described as simply “not good enough”, and also gave a simple, neat solution for ensuring media society coverage of sporting events: “Tell them earlier.”

Verdict: The general consensus is that Jess Morris has been a pretty terrific Sports President this year, and in some ways it’s tough to see past her for this election. She was strong and confident at the podium, but Steven Watson just might give students pause for thought. He communicated effectively and came across as passionate and thoughtful. Greg Mihill was engaging and to-the-point, but occasionally seemed to struggle with detail.”

“A toss-up between Jess and Steven.”

Don’t forget, Alternative Hustings in Venue at 6:30pm tomorrow! (That’s a Thursday for all of you who don’t know what day it is.) We’ve only just got started interrogating these candidates.