The band PVRIS have been making their way up the ranks in music the past few years. They are currently out performing their first UK and European headline tour with the band stopping in Glasgow last Monday to play for a Scottish crowd. 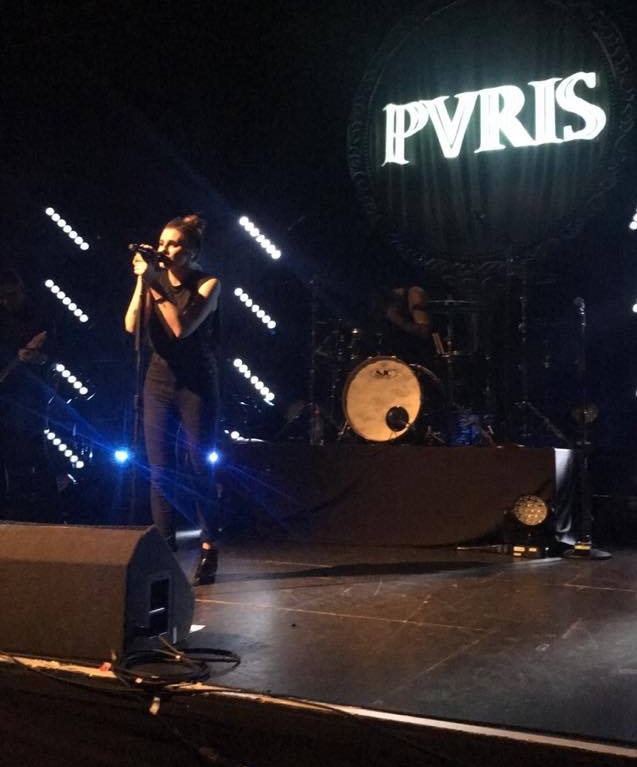 PVRIS consists of vocalist/guitarist Lynn Gunn, guitarist Alex Badinski and bassist Brian Macdonald. The band formed in 2012 and began gaining attraction with their self-titled EP in 2013. However, it would be the release of their first studio album, White Noise, that would launch them into the spotlight.

The bands pop and electronic sound have produced recognisable songs such as their first single “St. Patrick”, along side “My House” and “Fire”.

It was in 2016 that the band first made it into the top 40 with their latest single “You and I”; which will feature on their forthcoming deluxe version of White Noise – due for release April 22nd.
I sat down with the band to discuss their rise to fame before their gig at Glasgow.

Did you ever expect the success you are experiencing right now? Also, did you expect it to come as fast?

Alex: No and not as fast.

Lynn: No, we definitely wanted it and set goals and hoped to accomplish them but didn’t actually know if they would happen.

Have you begun to see a bigger fan base develop in the UK?

How are you feeling about the deluxe release of White Noise, are you excited for it?

Alex: Yeah I’m excited for the fans to hear the new tracks!

Lynn: Yeah we heard! Our lawyer actually keeps really good track of all the charts everywhere and he will always text it to us.

How is the current tour going?

Lynn: Yeah we’ve toured in the UK before, I couldn’t tell you how many times in total but it’s out fourth show tonight and it’s going great.

Lynn: Yeah we love all the crowds over here.

Alex: You guys have a chant don’t yous?

Lynn: Yeah, “here we, here we”.  [Laughs] Last time we were here they did it in time with St. Patrick and it was really cool – it got us so amped!

Do you have a favourite place to play?

Alex: I’m going to be really cheesy and say the UK!

Lynn: Yeah, especially the ones over here we have done.

Alex: [Agrees] It’s difficult to say whether I favour a club show or a festival, it just depends on the day and circumstances.

Lynn: Yeah, there’s different factors that can make both really enjoyable with different elements that you’ll find in one but not the other.

And just one final question, if you were to recommend yourself to a new listener which song would you suggest?

Alex: I’m going to go ahead and say our new song “You and I”.

You can listen to that new single here.

PVRIS new album White Noise is available to pre-order now on iTunes with a release date on Friday April 22nd.

British heavyweights could rule the world