One of the UK’s leading estate agents sharply criticised University of Stirling accommodation in a report received by Stirling Council last year.

The report, which includes comments on the current availability of student housing as well as an assessment of the condition of existing accommodation, was compiled by Savills as part of an application for new, private student housing on Dumbarton Road in the city centre.

Even Beech Court, completed in 2014 and one of the newest residences on campus, is criticised as “not high spec”. Beech Court costs £145 per week.

Off-campus accommodation does not fare much better in the report, with John Forty’s Court described as “very basic”, despite “some light refurbishment to the kitchens in 2012”. The housing on Union Street in Stirling is described using the same terms as the oldest campus buildings: “Poor. Very basic.”

A University of Stirling spokesperson said: “Representatives from Savills did not visit university buildings at any point and, therefore, their claims are not based upon physical inspections or surveys of the properties.

“The university prides itself on offering a range of comfortable and secure accommodation to its students and the success of our approach is evidenced by the positive feedback we receive from our students. In addition, all of our buildings comply with Houses in Multiple Occupation (HMO) regulations and are inspected every two years. 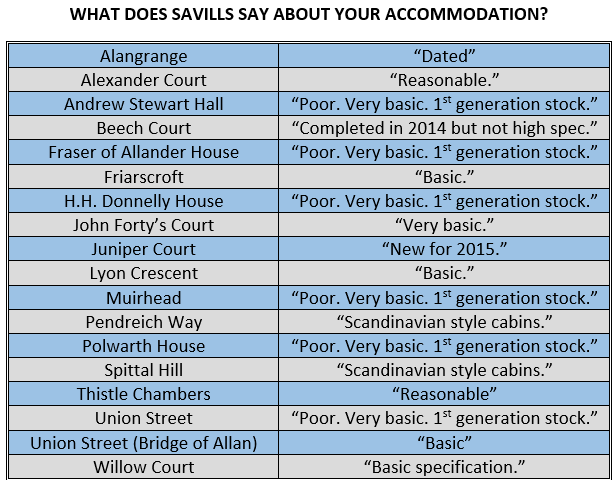 “In recent years, the university has spent more than £40 million upgrading its student accommodation. However, we recognise that our older properties will require further investment in the coming years to ensure we maintain our high standards.”

While Stirling Council received the application containing the report from Savills at the end of March 2017, dates from the report reveal that it was written in Quarter 3 of the 2016 financial year. This may explain the lack of an assessment for Juniper Court; its entry simply states “New for 2015.”

The application, for a private 150-bed student residence building on Dumbarton Road, was approved by Stirling Council in September last year. In supporting documents, the residence is referred to as Carters Yard.

A brochure produced by Savills in August 2017 explained that the 150 bedrooms would consist of 48 “self contained studios”, 6 “accessible studios”, and 96 “single en-suites” which would be clustered together in groups of four, six and eight.

The report also reveals that CRM Students, an accommodation management company, has drafted a management proposal that includes potential rates of rent for Carters Yard.

A spokesperson for Savills told Brig that these rents “were a guide for investors and are not set in stone”, saying that they are “likely to change.”

The potential cost of rent at Carters Yard has been a topic of discussion among students at the university since the plans for the new accommodation were first made public in March 2017.

In a Facebook post written in April last year, then- Students’ Union President Dave Keenan said that he “would be cautious to welcome the development of student accommodation by a private provider given that private providers have a track-record of exploiting students to extract profit.”

The post was written in reaction to comments from then-Union President-elect Astrid Smallenbroek, who was quoted in a Brig article as saying she thought the increase in places for students to stay was “fantastic”.

VP Communities Jamie Grant told Brig that an anticipated meeting between representatives of the Students’ Union and the developers of the Carters Yard site has yet to go ahead, saying: “Last summer the team and I were made aware of a private development going ahead in the city of Stirling, for student accommodation.

“Astrid and I had hoped to meet with the developers to discuss student welfare and what approach we could expect moving forward. Such a meeting hasn’t yet happened, due to some uncertainty in the status of the development, and its progress. We’re hoping to receive confirmation soon, and will endeavour to arrange this meeting soon after.

“Capacity in Stirling must be closely monitored by all parties involved. Our student population continues to grow; in a city of roughly 97,000, we continue to play our part in the life, economy and story of Stirling.

“The cap on HMOs, coupled with recent legislative changes to tenancies, mean that real conversations must begin about where Stirling’s students will rest their heads.”
+ posts

Holocaust Memorial Day: Lessons to learn from the past