The protests which began in December have finally brought an end to the brutal 30-year rule of Sudan’s President Omar al-Bashir. While initially sparked by male doctors, lawyers and other professionals frustrated with the countries economic decline, the movement was later seized by women who had been disproportionately repressed under al-Bashir.

These women became an unexpected political force during the Sudan uprisings since, despite their repressed status they ultimately helped to topple the oppressive rule of al-Bashir by taking to the streets in larger numbers than men. Some estimates calculate that 70% of individuals who have participated in the uprisings have been women.

In particular, a viral photograph of one young woman has encapsulated the Sudan uprising. The viral image is of a young woman identified as Alaa Salah, a 22-year-old engineering and architecture student standing on the roof of a car singing to a crowd of captivated predominantly female Sudanese protesters.

This event was powerful since it has been Sudanese women who have suffered the most under the brutal dictatorship of Omar al-Bashir with a lack of representation and a repressive penal code that disproportionately targets women especially students and women’s rights defenders. 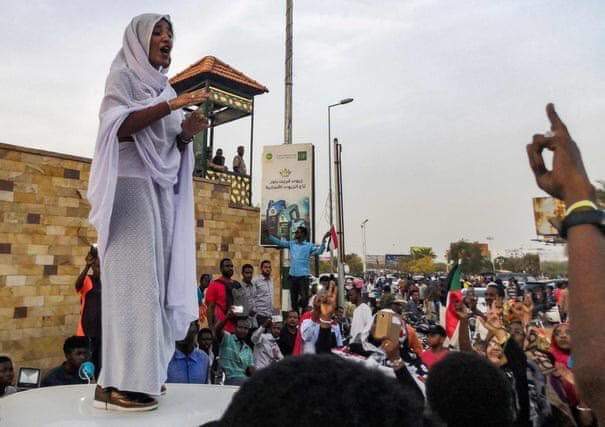 These repressive laws have been intended to exclude and intimidate women from actively participating in public life as they dictate what women can and cannot wear while in public and also where they can go.

Women’s private lives have also been controlled by these public order laws in which they must attain their male guardians consent to marry and can face lashes or even the death penalty for crimes such as adultery.

It becomes clear then how important this viral photograph is not only to women within Sudan but also to women throughout the Middle East and Africa region facing similar repression.

In the picture the young woman is wearing the traditional dress known as a toub, which is meaningful as it is worn by professional Sudanese women in the workforce and therefore is representative of an identity of a working woman.

The dress also symbolises a culture which has a history of powerful women wherein Alaa Salah declared that “It has a kind of power and it reminds us of the kandakas”.

The kandakas were queens of the Nubian kingdom of Kush, which ruled what is now modern-day Sudan more than 3,000 years ago.

Political engagement is not new to the women of Sudan however, and instead Sudanese women have a long history of political and social activism originating in the period of their independence from Great Britain in 1956. During this period Sudan had already developed one of the most powerful women’s movements in the Arab and African world.

Later in 1951 she co-founded the Sudanese women’s union which fought for Women’s right to vote and equal pay. This organisation also played a key role in the protests that toppled dictatorial governments in the October 1964 Revolution and the April intifada of 1985.

Through their continued political engagement and action, the women of Sudan have shown that their resistance is stronger than the government’s oppressive policies, which have ultimately failed in their goal of silencing the modern-day queens of Sudan.