In October of 2018, Kim Petras released her Halloween EP TURN OFF THE LIGHT, VOL 1 to critical acclaim. A year later, we now have the full project, and it’s everything volume one strived to be.

The new project consists of seventeen tracks in which seven of them feature little to no vocal appearances by Petras herself. Purgatory throws the listener headfirst into Kim’s forty-nine minute faux-horror soundtrack, teasing lyrical composure only to drop you into a techno spiral leading into track two with razor precision.

The album follows a winding structure of sinister instrumental tracks followed by traditional pop songs with a ghoulish twist, culminating in Everybody Dies, a track softer than the rest allowing a breath from the listener until they decide to experience it all over again. It’s the perfect credits song to such a harsh project from the new princess of bubblegum pop.

TURN OFF THE LIGHT seems to wear its influence on its sleeve, mixing the virtues of classic John Carpenter synthesiser soundtracks with echoes of Gesaffelstein and classic German techno reminiscent of Klangwerk or Enemies Of Carlotta F.O.C. II.

There’s a truly modern sensibility to her work, an understanding of classic horror structures and pop music not yet seen mixed by modern artists. Petras’ Germanic hailing is is undoubtedly celebrated in it’s dedication to the eerie era of 1990s industrial techno littered throughout, mixing ambience with harsh synths and muffled voiceover – seen best on In The Next Life, where she opts to do an entire verse in German.

The horror influences are no less vast. Though a lot of the synth heavy tracks are indicative of John Caprenter’s classic score Halloween it seems to draw just as much from Disasterpeace’s 2014 soundtrack for It Follows – with o m e n lifting chords straight from the album’s main theme, Title.

There’s also reason to suspect that Tubular Bells, the Excorcist’s main theme, inspired a lot of the main synth leads that run throughout a majority of the tracks. There’s even a feature on the title track from Mistress of the Dark herself Elvira, a cult presenter of the eighties which solidifies Kim’s meta-understanding of her own kitsch despite Elvira’s height of popularity being far before her own time.

Despite all of this, the project is still one-hundred percent a pop album which refuses to feign the orchestral whimsy of Poltergiest or the strings from Psycho even in name of it’s Halloween theme. It plants itself directly in the synth heavy era of the late seventies, with anchors further ahead with its techno inspiration and direct references to the films of the nineties.

It’s eclectic and eerie, each track a sense of deja vu for films you may have never even seen due to it’s understanding of tropes and grasp on how popular horror culture permeates mainstream media. This is one of the most exciting projects of the year and a future cult classic for any horror enthusiast. 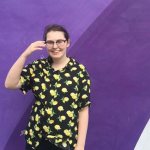