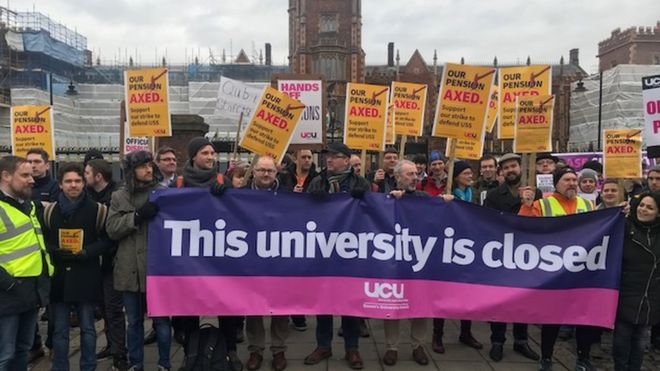 Monday marked the first of eights days of industrial action taken by academic staff from 60 universities across the UK. As with the strikes last year, confusion about support during the strikes and attendance requirements have meant students are unsure of how they’ll be affected. Brig has prepared a short guide to answer some of these questions.

Why are the strikes happening?

Students may remember the much longer strikes in 2018 which coincided with a period of bad weather, leading to widespread disruption. The strikes this time will be much shorter, although action short of a strike (known as work to rule) will continue until Wednesday 29th April 2020.

The strikes centre around two key disputes between the UCU (University and College Union) and the UUK (Universities UK). The first issue surrounds changes to pension contributions which the UCU claims would leave lecturers with £240,000 less than in previous years.

Pension reforms in 2004 and 2011, meant to ensure the viability of pensions if member organisations folded, have meant that academic staff are being asked to contribute more towards their pensions to receive less upon retirement. Mervyn King, former Governor of the Bank of England, has called the reforms,

“A prime, but by no means unique, example of well-intentioned but inept financial regulation”.

It is considered extremely unlikely that the entire UK Higher education sector will collapse.

The UCU want universities to be responsible for the increases towards pension contributions.

However, UUK say that this would lead to larger class sizes, less teaching, course closures and fewer jobs.

The UUK has also stated that the pension scheme is generous compared with others, and that employers are already paying a higher contribution towards pensions than members.

The other dispute surrounds pay and working conditions for academic staff. The increasing salaries of Vice Chancellors as teaching staff are pushed into temporary contracts has caused anger amongst higher education workers. According to the UCU, more than half of UK academics are on precarious or zero hours contracts.

The gender pay gap has also been highlighted in the dispute, as well as falling real terms pay for academics.

The majority of the 60 universities involved in the industrial action will strike on both issues.

How are students affected?

Not all lecturers plan to take part. Students should liaise with their teaching staff to find out what lectures will be cancelled on their courses.

For lectures that are cancelled, it is unlikely that any will be rescheduled as this would defeat the purpose of the strike. However, some lecturers may still upload notes and academic readings for their course.

Can I miss seminars?

As above, some seminars will be cancelled because of the strike. However, a common misperception is that students don’t need to attend proscribed classes which are still running.

Chloe Whyte, newly elected Union President, has stated that this is not the case, and the usual penalties will apply for non-attendance.

Can I support the strike?

Some students may wish to join the picket line with lecturers, and the student union has issued a statement of support to the strikers.

However, students should not feel threatened if they attend lectures as usual, and there is a strict no harassment policy for anyone taking part in a picket.

The union would like to stress the support available to students during this tricky time, and would like to encourage those affected to contact advocacy.union@stir.ac.uk if they require support.

‘Heating your home versus feeding your family’: Protesters gather in Glasgow against the rising cost of living

Keeping up with the Alumni

Allan Stewart interview: “Andy Gray and I cried together”