On Thursday, October 14 the Methodist Church in Stirling held a talk as part of the Stirling Climate Festival: ‘Faith and the environment’.

The talk took place over Zoom as well as with people socially distanced in the Church on Queen Street. It was led by Reverend David Coleman, typically based in Edinburgh. His official title being environmental chaplain for the Christian Ecumenical Charity, Eco-Congregation Scotland.

The talk started from the beginning of all things, as some would say, with the tree of life. Walking us through the reality, that faith and looking after the planet are intricately intertwined.

For God to have built a world that involves the earth, the flowers, the animals and for us to destroy it, almost seems like an act against a god that roughly 2.2 billion people claim to believe in.

Reverend Coleman pointed out that the Church needs to “trust the science”, moving away from a purely theological grasp of the bible. He condemned the “oil giants” such as Shell, Exxon and BP.

During a Q and A session with some people present in the church, Coleman urged members of the University of Stirling Christian Union to become more involved with the movement, with a couple of members present in the crowd.

“If you are neutral in situations of injustice, you have chosen the side of the oppressor. If an elephant has its foot on the tail of a mouse and you say that you are neutral, the mouse will not appreciate your neutrality”

Eco-congregation Scotland are holding many talks over Zoom during the course of COP26 such as ‘Let’s talk about the Climate Emergency – Our Global Connections’ on the October 25 and ‘EcoHighland 2021 Opening Worship’ on the October 31.

As well as this, on October 31, they will be holding a vigil at 2pm for one hour in George square, Glasgow.

To get involved in events hosted by the eco-congregation look here : Upcoming Events (ecocongregationscotland.org) 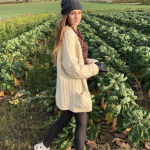