Making its debut on Netflix, the ten-hour series, Dahmer-Monster: The Jeffrey Dahmer Story, swiftly soared to number one after only being on the platform for a few days. The show retells in shocking detail, the events of the ‘Milwaukee cannibal’ that spanned over 13 years.

In a promotional video with Evan Peters who plays Dahmer, he stated that the series is supposed to focus on the “repercussions, it’s how society and our system failed to stop him multiple times because of racism and homophobia”.

One of America’s most notorious serial killers was enabled by blatant systemic failures and got away with his murderous spree for over a decade. At the time of writing, this is Netflix’s most-watched series, begging the question – are the public desensitised to such gruesome events… or are they simply enjoying it?

Are we too infatuated with the show’s star attraction, despite creators’ attempts to focus on the outcomes and the shattered lives left in the wake of Dahmer’s heinous crimes? Close relative to victim Errol Lindsey tweeted: “…how many movies/shows/documentaries do we need?”

As an audience, are we feeding into the capitalisation of such heinous crimes, or is it okay for watchers to be entertained by these horrifying events, even if they are brutally true?

Seventeen-time killer, Jeffree Dahmer, began his spree at the age of 18. His youngest victim, Konerak Sinthasomphone, was only 14 when this remorseless savage took his life away.

Dahmer actively sought his victims out in various public areas such as nightclubs or bars. Targeting gay men, Dahmer lured his victims to his home with promises of sex or money. Most of the people Dahmer targeted were black, Asian, or Latino.

Before killing his victims, Dahmer provided them with alcohol laced with triazolam or temazepam, which are both substances that can be used as tranquillizers. After killing his captives, Dahmer proceeded to have sex with them before dismembering their bodies.

The serial killer kept body parts as souvenirs and took photos of victims during the murder process before storing their bodies in 57-gallon drums, bought with the sole purpose of body disposal in mind.

Almost every despicable action Dahmer did was premeditated, and his catalogue of victims affirms this sad truth. In 1992, Dahmer was sentenced to 16 terms of life imprisonment. After serving only three years of his sentence, Dahmer was beaten to death by another prisoner in 1994.

The series shows events of Dahmer’s childhood and almost tries to make sense of Dahmer’s unknowable mind, or at least provide some sort of insight into his premeditated and merciless actions.

One criticism of the show is that it could be interpreted as humanising the crimes of such a notorious killer.

Featuring scenes exemplifying Dahmer’s early fascination with dead animals, audiences are inclined to almost feel empathetic or sentimental towards Dahmer after watching recreations of a young Dahmer with his father.

The scenes show the pair dissecting roadkill as part of their quality time together. Partaking in this disturbing hobby carried on for Dahmer throughout the years to come, needlessly spiralling from keeping animal bones as toys to dissolving human bodies in acid and flushing them down the toilet.

Creators Ryan Murphy and Ian Brennan are being criticised for their arguably excessive amount of gruesome scenes reenacted throughout this show. With questions from audiences being raised, querying if this was yet another crass exploitation of a tragic series of real events, or if Dahmer’s actions warranted so much screentime?

In over 190 countries, Netflix has a massive 221 million memberships to its platform, do they need the money this sort of exploitative show brings? Over the years, Dahmer’s crimes have been profited from time and time again with dozens of media projects being published surrounding Dahmer’s terrifying psyche.

In other ways, the scope does attempt to centre the victims and unsung heroes by telling the events through the lens of the victims rather than Dahmer.

Murphy and Brennan did this by pointing out the brutalities and misconducts carried out in the Milwaukee police department, right through to repeatedly highlighting systemic racism and homophobia, specifically throughout the handling of this case.

The series mentions how even after Dahmer’s sentencing, he was glorified and mythologised by members of the public with many identifying themselves as fans, idolising Dahmer, and crediting his actions.

They even sent him letters containing money while he was in prison in return for his autograph. This isn’t the first time a killer has been admired, with the likes of Ted Bundy being called ‘hot’ despite killing 30 women.

Members of the public swiftly became infatuated with Dahmer, just as with Bundy, referring to the 34-year-old as being ‘conventionally good-looking’.

Bundy also has multiple series with platforms profiting off retelling his crimes, with the hit movie Extremely Wicked, Shockingly Evil and Vile, starring Zac Efron, being one of these.

This biographical crime drama made a major 9.8 million USD at the box office, proving once again that killers sell.

A self-published book My Friend Dahmer, written by John Backderf, was turned into a movie and released in 2017 giving yet another perspective and major profit from their version and re-telling of events.

Pop stars such as Katy Perry and Kesha, are also throwing Dahmer’s name around in some of their most famous song lyrics. One of Perry’s incredibly successful songs Dark Horse has the line “she eats your heart out like Jeffrey Dahmer.”

Is this sort of laissez-faire attitude embedded throughout our culture in the 21st century, and is it meant to be socially acceptable to use major criminals’ names for our benefit or to make a profit? It appears that many are doing it, including A-list celebrities, but that doesn’t make it morally right.

With the families of Dahmer’s victims being forced to relive events of the past through media productions such as Netflix’s latest Dahmer series. There needs to be some consideration for all involved, especially those who are trying to move on whilst dealing with their uncalled-for past traumas.

As mentioned, there are clear amounts of evidence pointing toward the de-sensitisation of murder and other foul acts, which begs the question, is there hope for an apathetic society or do our morals need to be realigned? 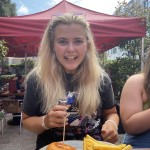