Raw Material and Capital Theatres present James IV: Queen of the Fight in association with National Theatre of Scotland.

Following its world premiere at the Festival Theatre in Edinburgh, the play has been touring Scotland and will be in Stirling next week.

This is playwright and executive producer Rona Munro’s fourth instalment in her King James series. James IV: Queen of the Fight is a new chapter that reveals the vibrant cultural mix of the Scottish court and early 16th-century Scottish history.

The year is 1504. Two Moorish women, Ellen and Anne, are new arrivals at the Scottish court of King James IV. Both women have to fight to find and keep a place in the dazzling yet dangerous world of James IV’s court.

It’s a world where war is never far away, and words of love and promises of peace are not what they seem, and where poets might turn out to be deadlier than any assassin. This is the story of James IV’s exhilarating court and its underrepresented diversity.

For this brand-new production, Munro reunites with director Laurie Sansom and designer Jon Bausor, both of whom worked on the first three James plays. British historian Dr Onyeka Nubia has worked as a historical consultant on the project.

James IV: Queen of the Fight will be live at the Macrobert Arts Centre for a total of six performances, including a Saturday matinee, from November 9 to12. 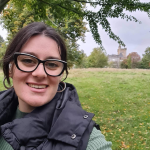