Stars of the sporting world – including Sir Alex Ferguson – rallied around University of Stirling footballers before their historic Scottish Cup Fourth Round tie with Dundee United.

Further messages of support flooded in from some of the biggest names in sport, with Judy Murray and even former French international footballer Lilian Thuram sending their best wishes. University of Stirling alumni Eve Muirhead and Ross Murdoch also voiced their admiration for the team’s achievements and sent messages of encouragement.

Amongst the names was former Scotland boss Craig Brown – whose grandson and namesake played for the University for four years, captaining the side in the 2020/21 season.

In a short film sent to players and coaching staff, Brown – who managed the Scottish national team between 1993 and 2001 – said: “I wish you all the very best ahead of your cup tie at Tannadice on Saturday. I saw your team quite often in the last few years and I thought they were excellent.”

He added: “You guys can create history, I’m certain, and everyone out with the Dundee United fans will be hoping for a cup upset. They need look no further, I hope, than Tannadice on Saturday because, if you’re on form, and you get them on a dodgy day, there’s an opportunity for a shock result.”

More than 1000 supporters – comprising students, staff, alumni, and members of the local community – travelled to support the team for their clash with Premiership side Dundee United.

Despite the defeat, it was a landmark achievement for the University, with David Bond, Head of Performance Sport saying in the build-up: “We are incredibly proud of everything that the players, Chris, and his coaching staff, have achieved this season.”

The team – managed by head coach Chris Geddes – became the first university side to reach the last 32 of the Scottish Cup in more than 50 years. Made up of students on football scholarships, Geddes’ side beat Albion Rovers in the third round, with midfielder Euan McGill scoring the only goal of the game in extra time. 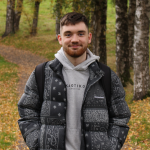