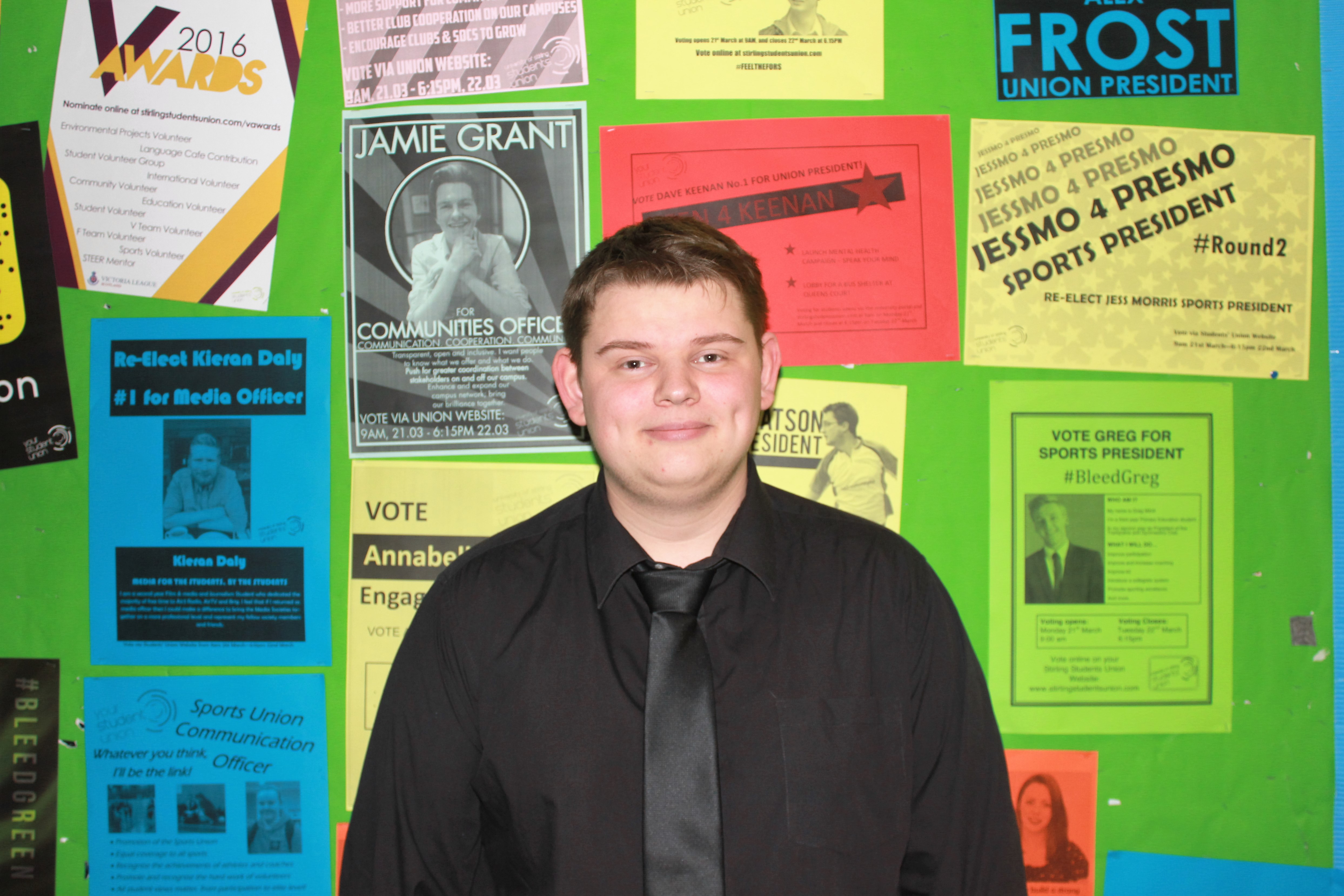 First of all, tell us a little about yourself and why you’re running for president.

I’m a 4th year PPE student, and I was an ALS last year, which opened my eyes to the student experience. It’s been a bit different, from my first year. I’m running because I want to refocus the Union’s attention back on the student body, instead of pursuing a different political agenda that doesn’t really focus on students at all.

One of the main focuses of all 3 candidates is student accommodation. In your manifesto, you say that you want to continue the Living Rent Campaign, what specifically will you do to continue the campaign?

I would have to review what’s been done already, and when I’m going through it, what I’d want to do to further it is re-open discussions with accommodation services, get the NUS on board and see if they could start a nationwide campaign because it’s ridiculous everywhere. Apparently, at Edinburgh you can get rent of between 400 and 600 pounds a month. If we’ve got that much backing behind us, and with the support of students, then hopefully we’d be able to have a better opportunity to lower the price, instead of getting a half-arsed attempt at appeasement.

In your manifesto you said that you would like to get more from the NUS, what specifically would you like to get from them?

All we seem to get is the cheap alcohol, which has its pros and cons. I know Craig is focusing on creating more of a destination for students to go out and have a good night. What I’d be looking for from the NUS would be more support from them, in order to further student well-being. Putting pressure on accommodation, things to do with mental health would be great. They do a lot with campaigns, but beyond that it’s just a mystery as to what they can provide. But if we can get anything to do with mental health and student welfare and hopefully alumni could help students studying currently, that would be great.

Are you happy with the progress Andrew Kinnell has made with the Living Rent Campaign? Do you think that he negotiated a good deal?

I appreciate his efforts, but with regards to accommodation, I’m pretty sure that was the same deal they achieved last year. Newer accommodation shouldn’t be rising with inflation they should be falling back in line with what students can afford. I know it’s new accommodation, I know they’re used as hotel rooms during the summer, but we’re students, some of us don’t have an income, some of us don’t get support from home. Of course there are those that have to work. Accommodation prices need to be set in line with student loans.

In November’s by-elections, voter turnout was a mere 2% of students. As Union president, what are some of the things that you would do to increase turnout?

With the by-elections, what I think happened, was that there wasn’t enough advertising for it. It was three days before the by-elections, there wasn’t as much of a run up as there are with these elections. It would be great to have the same process as we do now with Brig and AirTV, if they’re willing to do that. I would also like to modernise the process a bit, so everyone can plug in through the portal, have their vote and see what’s been said. Instead of having people forget that it’s on or not attend because they’ve got their sports and clubs to go to. But the problem is trying to overcome this mentality of “if I don’t know them, or I don’t like what they’re saying then I’m not going to vote”. That’s the type of mentality that’s going around on certain anonymous social media sites.

The Student Union exists as a body to represent all students. This year, all 3 candidates for its Presidency are white men. How do you think this reflects on the state of the Union?

That’s a really good question. Recently, we have had Amy McDermott, and she was brilliant. But you’re right, a lot of the time it is white men. And I’m not entirely sure whether the reasons for that are because better opportunities haven’t presented themselves to people who don’t fit in that category or they don’t feel like they would. I’m pretty sure that if Chido Sibanda was here and he ran for the position he’d have got it, no problem at all. I don’t feel like it’s an issue with the Union neglecting these people. It’s a difficult one to theorise, because there are so many reasons that could come into play. How it reflects I have no idea.

As Union President, how would you encourage diversity in the Union?

What I’m more than happy for, is if there’s a group of students who want to share their culture, then by all means, that has a great priority in the Atrium. Instead of it being used as an empty space, I would love to have other venues, to share and experience what it is to be of a different culture. Without the fear of it being proclaimed as ‘cultural appropriation’ because it’s literally experiencing someone else’s culture. That’s a good thing. If it’s ever at all possible to have ethnic groups, whether that be religion or different countries. Celebrating other cultures is great. Although, with Black History Month, I’m not really sure about just relegating it down to one month is a good idea, but history is all history, and whether you want to celebrate that through performances, talks, debates that’s great.

Another key point in your manifesto, which I haven’t seen in anyone else’s manifesto, is autonomy for Clubs and Societies. Can you explain a bit more about that and how you would achieve it?

Two years ago I was part of a campaign team to essentially allow Clubs and Societies to spend their money however they wanted. It is the members’ money, it goes into that club, and the committee must come back and make sure that the members are happy. It’s not that the committee members are going to run away and do whatever the hell they want with that money. Issues that keep occurring are that you go to the Union and you’ll talk to either Wendy or Jill, then after filling out mountains of paperwork, you’ll find out that you can’t actually access your money because it’s not in the Club, or you can only have either 60% or 80%.

We achieved 100% financial autonomy, and yet the Union still restricts that. Clubs should be allowed, within reason, to have their own goals, objectives and cater to what their members want. I know there is a scheme where you can apply for a grant, to pursue something that’s slightly different from your club. Coming from the Paintball Society, it’s really awkward because if the money is going to be used for anything other than paintball, you can be refused. If were to hold a referendum, as we have before, then we could change that. It’s essentially just reinforcing that students who are paid members of Clubs and Societies, who have given feedback to their committee, should be able to do what they will with those funds.

Last Tuesday, PolSoc hosted an Israeli diplomat as part of their debate on the Iran nuclear deal. As a result, the SSP society and RISE protested the event, arguing that hosting an Israeli diplomat legitimises relations with the Israeli state. Do you think it was right for PolSoc to go ahead with the event? And did you support efforts to protest?

I think the Politics Society had their own right to host that diplomat. What it was on was the Iran nuclear deal. It was, from what I can see, an effort to gain sufficient knowledge, and investigate what happened there. It wasn’t a rally to further the cause of Israel oppressing Palestine. Of course I will allow the SSP to protest it, they have their own right to.

But we are a University first and foremost, we are not the UN. We can’t sit there and sanction Israel, but at the same time we need to take relevant steps to ensure that we are able to get certain knowledge.

In the future, what I’d like to see if we have those types of things happening again, perhaps have a structured debate where you had both sides attending. I understand that the protest was done through concern for Palestinian students and how they would feel about an Israeli diplomat coming. I’m not sure whether a Palestinian student was asked their opinion, I think it was just assumed that they would react that way, before the protest took place. Naturally they could feel that way, and that’s fine. I stand by the Politics Society being allowed to host the Israeli diplomat.

In your first 100 days as Union president, what would you like to have achieved?

What I’d really like to have done in my first 100 days, is set up a system of student feedback.

Nottingham Trent University have a system called ‘Big Ideas’, where students don’t have to wait for a survey to come around you can suggest things in real time that can improve the University. I have one already from Rob Andrews, to do with bookings in the library. Currently, you have to apply to the room, be rejected by the room and then try again. It would just be easier to have that all on a display, when you’re going to book a room. If we could have that set up and ready that would be great.

Obviously there’s already the SnapChat going around, which is a good idea. But my first 100 days will definitely involve the modernisation points for the Union.