Almost 200 students have been left without a place to live, after the university contacted them to say they had not been allocated university accommodation – two weeks before the start of term.

The vast majority of those affected are first years.

New students took to the Official Stirling Freshers 2017 Facebook page to complain in their droves that they had nowhere to live. It is understood 180 students have been affected.

One student phrased it as the “Worst way possible of starting UofS!!”. One of the posts has accumulated over 19 ‘reactions’ and 50 comments.

According to the email received by students, university halls of residence had filled up due to “significantly increased demand for university accommodation this year”, and apologised to students unable to acquire accommodation.

The email also directed to the university’s page listing local estate and letting agents in Stirling.

However, with just over two weeks until term starts, many students are trying to find flat -mates and last minute rent opportunities. 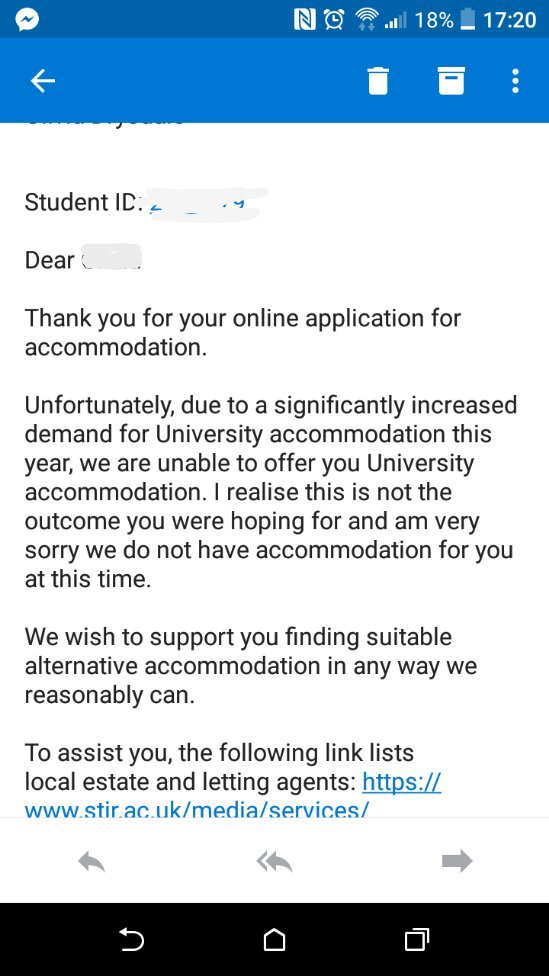 One student said she applied in June, but also “heard people say they applied as soon as they were able back in April/May”.

On its website, the university says: “We prioritise all students in their first year of study for accommodation, as long as applications are received by the advertised date”.

That application deadline for studying at Stirling University for autumn semester start was April 1 of this year.

A number of the students affected are those who were awaiting A-level or Scottish Higher results, both of which were released earlier this month.

Brig spoke to several students in this position, who said it was “outrageous” the university was pushing clearing so heavily, only to leave them without somewhere to live.

Many returning students who had already been successful in applying for university accommodation, have been emailed asking if they would be willing to relinquish their accommodation.

The email read: “Further to our email of 10 August, I am sending a short reminder to ask if any student would like to be released from their university accommodation contract?

“From our experience over the past few years some returning students come forward at the beginning of the academic year requesting to be released from their contract as they had made alternative arrangements.”

VP Communities, Jamie Grant, said of the issue: “I can understand the frustration that some students are facing at the moment when it comes to accommodation offers. The university plays a difficult balancing act trying to accommodate the housing needs of up to 12,000 students, with only around 3,000 beds.

“In the last few years, the university has responded to student feedback, and have worked to allocate spaces on a variety of factors and variables: care leavers, those with medical concerns, international students, nurses etc. all remain a top priority.”

Grant, whose first action in office was to create a Housing Officer, encouraged students affected to search in “Bridge of Allan, Stirling City Centre, Alloa, Bannockburn and similar towns and hamlets surrounding the city of Stirling, [which] can offer flexible rental options, even when including any commuting costs.”

He also urged students to remain in contact with Accommodation Services to find a suitable solution.

A university worker, who wished to remain anonymous, said: “There was one girl whose mum phoned. Her daughter had been given an offer of accommodation and didn’t get the grades for one of her subjects.

“Accommodation Services promised to hold onto her place. The mum phoned today very agitated that the university was now telling her they had no accommodation for her. I don’t know if it was resolved but I doubt it as the buildings are full to the brim.”

The University of Stirling responded: “Due to significantly increased demand this year, we regret we have been unable to offer a number of students University accommodation.  We are making contact with all affected students, and are exploring a range of options to help them find suitable accommodation. Our accommodation team can be reached on 01786 467060.”

Back to the future: The hype around electric cars

The return of Taylor Swift