For those of us who loved the BBC series, Dad’s Army, which ran from 1968 to 1977, we were in two minds about the new 2016 film which sought to replicate the famous characters and their fighting spirit.

For it wasn’t just the characters and comical stories from the previous series that held it all together like glue, it was the cast who brought their own eccentricity to the roles that made Dad’s Army so popular. With those such as the one and only Arthur Lowe, along with John Le Mesurier and Clive Dunn in mind, the public were wary that this new adaptation might be a total flop for British entertainment morale.

But I am pleased to say that the new Dad’s Army was a real treat. The film offered a fantastic British cast including Toby Jones as Mainwaring, Bill Nighy as Wilson, Michael Gambon as Godfrey, Sarah Lancashire as Mrs Pike, Tom Courtenay as Jones, Alison Steadman as Mrs Fox, and Catherine Zeta-Jones as the dark horse, Rose Winters. And with such a group of fine actors and actresses, one just knows that it’s going to be a job well done.

The film was set in good old Walmington-on-Sea as Mainwaring and his team of Home Guard soldiers work tirelessly to protect their coastline and England. But surprisingly enough, things aren’t going too well and their platoon, and Mainwaring in particular are under scrutiny. It turns out that the Home Office just aren’t feeling too sporting about goings on in Walmingon-On-Sea and are threatening to close down the platoon if they don’t pull up their socks and make that Mr Hitler think again.

But just as Mainwaring as his gang of OAPs are courageously doing their bit for their country and chasing an escapee bull from here to there, a rather beautiful and sophisticated lady appears on the scene. This dazzling young journalist, by the name of Rose Winters turns up and claims she is here to write an article on the Walmington-On-Sea platoon. Fluttering her eyelashes, she asks to learn all about the men’s routine and their top secret plans to stop Jerry’s little game. Of course, Mainwaring along with everyone else falls head over heels for the lovely lady. However, not is all as it seems, as danger is just around the corner and it’s up to Dad’s Army to save the day and prove old England ain’t done. 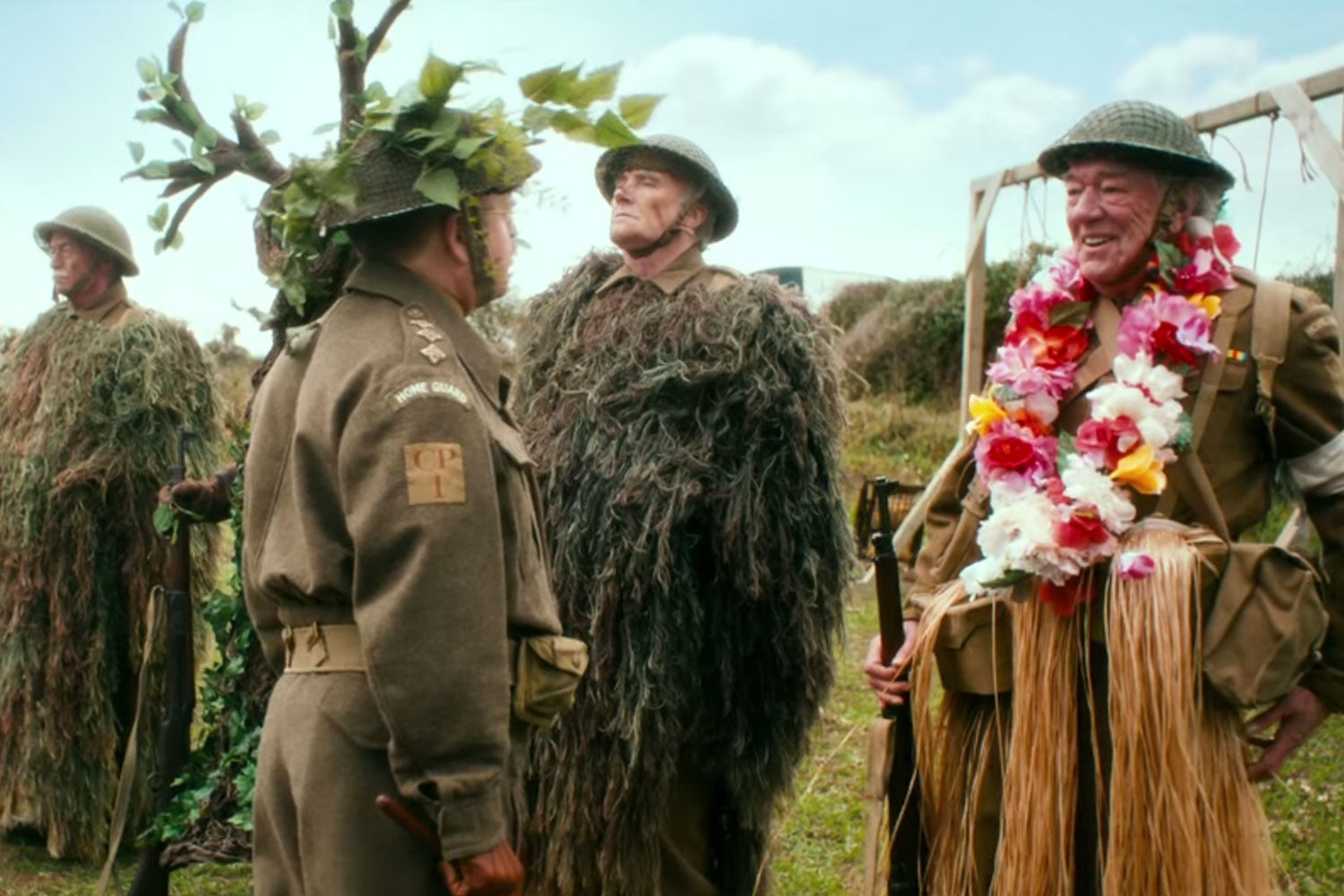 The reason why I loved this film was because it was simple. It realised that it had high expectations and understood that it couldn’t bring the whole package and please everyone. As a result, it was modest, well-cut and just a big barrel of modest laughs.

The story wasn’t too complex and adventurous. It was straightforward and kept to the style of the old series. The script was very intelligent with great timings for humour and a pinch of sincerity to add flavour. There was more emphasis on the role of women in this film than in the previous series, and that added a thoroughly fresh dimension to the concept of Dad’s Army, and really reminded us that Mum knows best.

The colouring and mise-en was very inviting. It had a great feel for 1940s coastal England and the authenticity was natural rather than forced. It was very colourful too, with Catherine Zeta-Jones in a lot of bright and brisk outfits to add to her character and style, whereas the Women’s Brigade were in stiff, dull materials to bring out the efficient but unflattering uniforms of Second World War Britain. And the whole film incorporated colour filters, especially in the countryside to emphasise the green, luscious, rural England and its charming ways.

But most importantly, the acting was spot on. Naturally, with the cast of the past, a 2016 Dad’s Army remake was going to require a lot of consideration when it came to casting. But the cast were fantastic and they all resurrected the old characters in a very touching and thoughtful way, but at the same time, they added their own unique twinkle.

Overall, Dad’s Army will not have pleased everyone. I think it depends very much on what you were hoping for. To me, it was simple but refined and everything from the script to cast reminded us of the Dad’s Army we know and love, but gave us just a little something new for today’s audience.