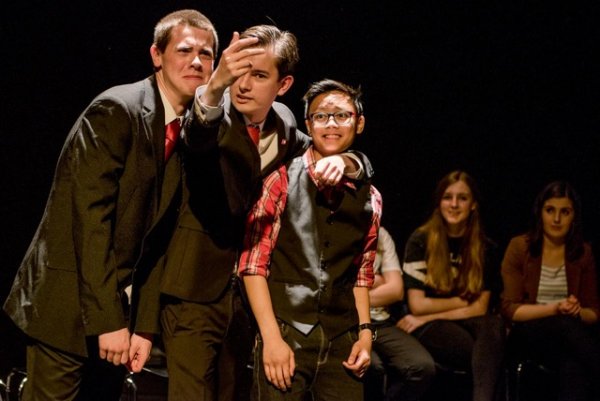 (Three members of the Bassett cast)

Macrobert Arts Centre has put on yet another sensational theatre event through the Macrobert Young Company, which comprises of young people aged 14-17 from Stirling and the Forth Valley area.

Set in a rowdy high school classroom in Wootton Bassett, the play witnesses the dynamics between a mix-mash of kids who grapple for power, attention and ideological dominance in a confined space.

The beginning of play is a delightful mess to observe. A rather questionable supply teacher seems to have abandoned the classroom and locked her pupils in. And boy, do they all have drama of their own. Dean (Daniel Rodger) urgently needs the loo and is in great danger of embarrassing his trousers before the class and ending his social life forever, Amid (Jed McAfee) really wants some peace and quiet to pray to Allah and Spencer (Kayleigh Fraser) must continue staring at the wall in case the teacher returns and she gets in serious trouble.

But most desperate of them all, is Leo (Angus King) who is determined to break free. Why? Well, it isn’t just about being locked in a classroom that’s annoying these kids. It is something far more important. Near the school, a parade of sorts is taking place for a fallen British solider from Wootton Basset. Even although this small community has already seen its fair, or should be say, unfair share of lost boys, this particular death has great significance to the classroom captives.

As the play continues and the kids get more and more like caged animals, secrets spill out that they’d rather keep hidden. Before long, with nobody to govern them, things turn ugly as Leo asserts his aggression and power over his classmates and reveals to them his very disturbing concept of what it means to be a proud and true Britain. Through the last few minutes of the play, we get a frightening insight into a generation that has been subconsciously damaged by war.

So, that’s the story, but how did the show fair? The play started off a little bit shaky, with moments of poor diction and flawed movements between dialogues. However, it soon picked up and became a magnetic live performance. The only other issue I had, was to do with the teacher leaving and locking the children in the room. I understand why it needed to happen for the story to develop, but it felt a bit far-fetched and unnatural.

Bassett proved to be a play that handled an array of significant and complex themes really well, much to the thanks of Graham’s expert script.

There was a natural and well-oiled degree of comedy in the play that brought out the innocence and concerns of this very particular age group. However, the cast were very mature and capable when dealing with the delicate elements to Bassett and Angus King in particular engaged the audience in a wonderfully haunting way.

There was a sinister exploration of many intricate issues in this play, such as: race, nationalism, gender expectations, religion, war, hypocrisy and naivety. It looked at how young people form ideas in their own sphere, their own private arena; without teachers to guide and instruct them on how to think and feel. It looked at diplomacy, the formulation of arguments and the legal system of trial and execution that goes on in the hierarchy of schools. It was like miniature grand personalities in a room; a micro-organism of the world. The tension in the room was unsettlingly stifling, but the brilliance of was down to the excellent directing and cast.

The use of the scene where the children marched as soldiers was a chilling reminder that even although so many children seem to embrace anarchy, many desire rigid stability and certainty in order to make sense of the disunity and confusing questions they find growing up in contemporary Britain. In connection, the moments were Spencer taught the class about past wars Britain had been involved in and British atrocities, it was a chilling reminder of how easily we forget the past and how easily we dismiss it to justify our own xenophobia and lack of responsibility.

Overall, Bassett was a very remarkable play and was had immense quality on so many levels. As Arts Editor, I was interested to know what the actors of Bassett thought about the themes and concepts behind the play and how it felt to take on the characters.

“Bassett touches on many themes including war, citizenship and sexuality. One thing that all the themes in Bassett have in common is that they are mature issues all faced by young people. It was the maturity of the topics and the ways that they’re discussed that made me so passionate about the show. Everyone will have an opinion on these topics, but not everyone will agree, and Bassett showcases this and sets characters at odds with each other as a result.

Leo is as patriotic as you can get, he loves his country and even wants to fight for it when he’s older, but when Leo finds out that not everyone locked in the classroom with him shares the same opinion as him, the classroom all of a sudden becomes very small and very claustrophobic. The character of Leo is incredibly passionate about everything he talks about, and whether I personally believe Leo’s beliefs are correct or not, it doesn’t matter because Leo does, and that’s what I tried to convey to the audience. Whether he is right or questionable, in Leo’s mind he’s right, and anyone who thinks differently is wrong. This play made me step back and rethink all of my opinions on the issues that are raised and still does every time I perform it. I hope that it has the same effect on the audience.”

“I found the play to be very powerful. The play wasn’t just about the repatriations that happen in Bassett. It touched on race, bullying, friendships, romance, equality and of course, war. This play really proves how young people are influenced and affected by world events. Bassett also showcases how teenagers have a huge say on what is going on in the world.”

“As a young person performing Bassett has been very interesting. Themes such as citizenship and identity are relevant to our generation which is why, as a young company, we thoroughly enjoyed exploring the piece and sharing the story to an audience. Dissecting the play has been interesting as each of us have found a link in certain characters and the opinions of characters that are within the play. We all worked to establish the meaning and messages of the play which contributed to making the show a dynamic and successful performance.”

Film Review: The Man Who Knew Infinity shows British cinema at its best