Graffiti daisies have appeared all over Stirling.

Much like actual daisies, which are wildflowers that appear in early spring and seem to grow everywhere, their graffiti counterparts have appeared across the city.

Roman mythology surrounding the nymph Belides, who transformed herself into a daisy to avoid unwanted attention, has given daisies connotations with modesty and innocence.

Generally, though they are believed to represent happiness, good luck and new beginnings.

As is the case with most art, there are dozens of ways that these simple flowers spiralling through Stirling can be understood.

Though, without any tag identifying the artist, the reason behind the flowers remains unconfirmed.

One Stirling resident wagered a guess that perhaps the artist may be wanting to “make people smile”.

Brig is opening up our social media for anyone who might know any details, and we encourage residents to post pictures of the daisies using the hashtag #StirlingBanksy. 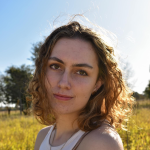 South African student journalist in my second year of doing my Bachelor of Arts with Honours in Journalism Studies.

South African student journalist in my second year of doing my Bachelor of Arts with Honours in Journalism Studies.